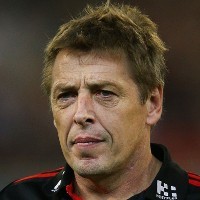 A solar energy company has been slammed by the Advertising Standards Board for a television ad that “normalises” and “could encourage” unsafe behaviour.

The True Value Solar advertisement depicted then Essendon coach Mark Thompson relaxing inside a collagen solarium after saying how much he has saved on energy costs after installing solar panels on his roof.

The ad was pulled from television after the Ad Standards Board found it breached prevailing community standards relating to health and safety.

One complaint read: “I believe this to [be] irresponsible and illegal in some states.”

Another person who complained to the advertising watchdog said the ad was insulting to those who have died of skin cancer.

“The ad distinctly shows a sun tanning solarium to show how the savings of using solar power [can be spent],” they wrote. “I think it is distasteful and sends the wrong message.”

In a statement to the advertising watchdog, True Value Solar (TVS) said it wished to express its support for the banning of commercial solariums – which will take place in Victoria, NSW, South Australia, the ACT and Queensland from January 1, 2015.

“TVS accepts and acknowledges that the use of tanning units is unsafe and leads to various forms of cancers, including skin cancers,” the company said.

“TVS does not support the use of tanning units whether at home or commercially. The advertisement was not intended to convey that message.”

The company also pointed out that the television advertisement did not depict Mark Thompson lying in a solarium fitted with UV globes in order to obtain a tan.

“The solarium in questions was fitted with collagen globes, which do not emit any form of harmful UV radiation,” the company said.

“Collagen globes are used for skin anti-ageing treatment and not for tanning … This fits into the context of the advertisement featuring Mr Thompson, and given his age.”

Michelle Gamble, digital marketing expert and founder of Marketing Angels, told SmartCompany businesses should be aware of not promoting unsafe behaviour in their advertising.

“I think it should be kept top of mind and particularly where the incident is quite controversial,” she says.

“There has been lots in the media [to do] with tanning. You don’t want those negative connotations in consumers’ minds.”

Gamble says there are many other ways to convince potential customers they will save money if they choose your product.

“Make sure the message of your ad doesn’t get lost because it is overwhelmed by something controversial. Don’t dilute the main message.”

True Value Solar has been contacted for comment, but did not respond prior to publication.