A Twitter meme has landed Geelong-based Southern Bay Brewery Co. in hot water with the industry regulator for alcohol advertising following a complaint it was promoting binge drinking.

The craft brewery was pulled up for a December 21 tweet, depicting a “1950s” man drinking a beer, with overlayed text reading “there’s nothing wrong with you that me drinking six beers can’t fix”.

The independent brewery argued the post wasn’t supporting binge-drinking and was instead designed to be humorous, but the Alchohol Beverages Advertising Code (ABAC) Scheme wasn’t laughing, upholding the complaint. 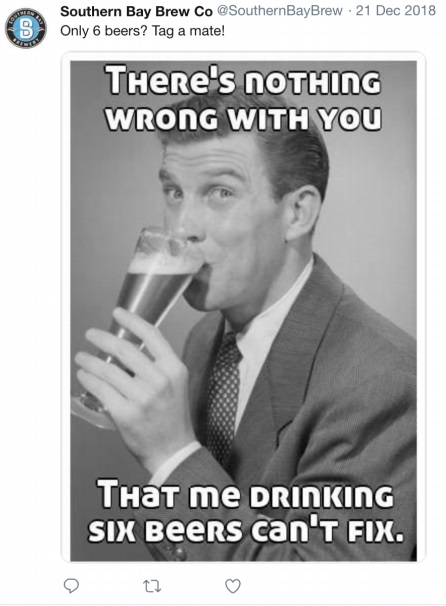 The “advertisement” in question. Source: ABAC.

It was argued six beers is “clearly in excess of responsible drinking practices”.

However, while the brewer’s defence against the complaint was unsuccessful, it was, at the very least, creative.

“The photo itself has a small tapered beer glass that is likely to hold approximately 285ml. It is similar to many old 1950’s style greeting
cards widely displayed in the marketplace nowadays that seem to be accepted by the general public,” the company said in its response to ABAC.

The business didn’t even design the ad, saying a contractor in Tasmania was responsible.

ABAC said the implication “it is a common and acceptable experience” to use “excessive alcohol consumption to navigate difficult situations” was a breach of the code.

“It would be fair to believe that a reasonable person is sufficiently worldly to take the tweet as being lighthearted and not seriously advocating that six beers be consumed to overcome a negative perception someone might hold about another person,” the body said.

“In fact, the humour relies on an assumed shared experience amongst many in the community that references the intoxicating effects of alcohol.”

The case highlights the changing nature of the alcohol market, with emerging craft breweries challenging the industry status quo in more ways than one.

The shadow regulator acknowledged this in its findings but did not determine it exempts up and coming players from industry codes.

“There has been significant growth in the number of craft brewers operating in Australia in recent years. As an industry group the Craft Brewers have yet to formally join the ABAC scheme,” ABAC said.

“Although engagement between the scheme and this part of the alcohol industry is increasing and the Panel’s experience has been that individual brewers which have been subject to public complaints about marketing items have responsibly participated in the complaints process.”

NOW READ: The most complained about ad in Australian history revealed