The most popular brands on Facebook in Australia revealed 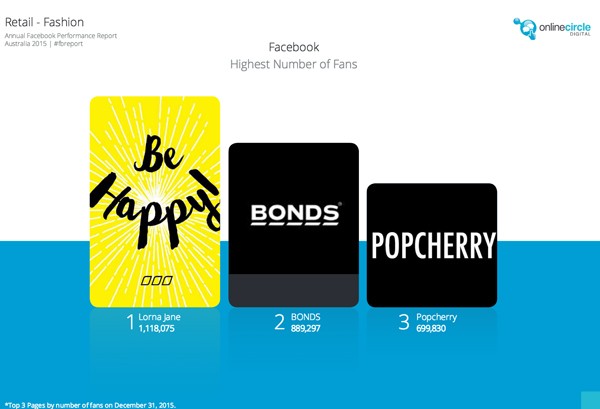 Excerpt from the report.

Target Australia is leading the pack when it comes to department and online stores on Facebook, according to a report on the top performing brands on Facebook in Australia released this week.

Online Circle Digital analysed the Facebook accounts of more than 2500 Australian brands to rank the brands with the largest and most engaged fan bases on the social network.

As of December 31, 2015, Target Australia had 627,059 Facebook fans, landing it the mantle of the department or online store with the highest number of followers.

Read more: Why Target’s new catalogue is being showered with praise on Facebook

Next in line is Ozsale with 589,524 Facebook followers and CatchOfTheDay.com.au with a fan base of 533,152 people.

In third place in the engagement ranks for department and online retailers is Harvey Norman, with an average engagement of 8352.

Overall the report shows Australians are using Facebook to follow music artists, travel and tourism pages and media outlets, with artists 5 Seconds of Summer and Iggy Azalea taking out the top two spots as the most liked brands on Facebook.

Also in the top 10 are Australia.com, with more than 6 million likes, and Sydney.com, with 2.2 million followers.

When it comes to engagement, media outlets such as the Today show and Sunrise are among the leading Facebook Pages, while fashion retailer and former Smart50 finalist Showpo is number 24 on the list.

The Facebook landscape has changed in the space of three years

Lucio Ribeiro, head of strategy and delivery at Online Circle Digital, told SmartCompany that there have been massive changes in how Australian brands are using Facebook in the three years the digital agency has been producing quarterly and annual reports about the social network.

“The big thing is the number of brands and the quick rate of adoption,” he says.

“Three years ago it was a different world, it was almost ‘pre-brand’,” Ribeiro says.

For many local brands, Facebook has become a primary marketing tool, with Ribeiro citing brands such as Mamamia that do not spend any marketing dollars on more traditional forms of advertising.

He says these brands are using a mix of organic and paid activity on Facebook.

“Now one doesn’t live without the other,” he says.

“You have to pay to reach an organic audience.”

“It has truly become a big media, mobile, portable, media channel,” he says.

While Ribeiro acknowledges many smaller brands are finding it increasingly difficult to get their Facebook posts in front of fans given continuous changes to Facebook’s algorithms, he believes some brands “blame the tool when the execution is poor”.

“Big brands like Coles and Woolies do have more money but the independent IGA can advertise just as efficiently [on Facebook] by targeting the location of their shoppers,” he says.

Ribeiro’s three tips for SMEs to get the most out of Facebook:

Whether it is driving traffic to a website or extending the reach of your message, Riberio says Facebook is so sophisticated these days that it pays to know your business’ objectives before using the platform as a marketing tool.

“You can’t appeal to everyone,” he says.