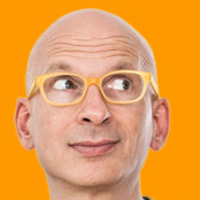 Successful businesses will be those who “treat different people differently”, according to author and marketing guru Seth Godin.

Visiting Australia for the first time and speaking at a Business Chicks event in Melbourne this morning, Godin said the world of commerce has moved beyond the “TV industrial complex” in which the primary goal of marketing was to interrupt an audience to tell them to buy more products, to an economy where personal connections are the holy grail.

“No longer can we yell at people long enough to get them to buy what we want them to,” says Godin.

Godin says Australia, a country that often struggled to make physical connections between products and people, is perfectly placed to take part in what he dubs “the connection revolution”.

Here’s 10 pieces of wisdom from Godin to help your business take its place in the revolution.

1. Don’t try to sell to everyone

Godin says companies often fall into the trap of trying to sell to as many people as possible by making their products “average” and in the end, competing on price.

“If you race to the bottom, you might win and that’s not fun,” says Godin. “And you might come second and that’s really not fun.”

Godin says the first mistake companies make is saying they are “for everyone”.

“Another definition of everyone is average,” says Godin, who says you must be willing to stand out from the crowd.

And the second mistake is telling customers: “You can buy this from anyone.”

“If you’re the only one in your category that connects to people, we’ll cross the road to do business with you,” he says.

In the “connection economy”, Godin says value will only be created by those who work together.

Always give credit to your boss and team members, says Godin, and if you can become someone who “relentlessly” accepts responsibility when things go wrong, “you’ll be priceless”.

Godin says savvy entrepreneurs will also realise the value of connecting with those outside their business.

“All of us is smarter than one of us”.

3. Be prepared to adjust

According to Godin, the internet has made it easier for companies and brands to adjust their offering in small increments.

He showed the audience an image of cans on a supermarket shelf that had to be discounted because of a spelling error on the product label. In a digital age, Godin says companies would be able to correct such mistakes much faster and therefore avoid having to cut their prices.

Tribes are groups of people who “share a way of being with each other”, says Godin. And they are becoming more important in an economy built on personal connections.

Why do groups of Star Trek fans travel around the world to spend time together?

“We’re good at doing what others like to do.

The world is waiting for leaders, says Godin. And for those people who are willing to raise their hand a little higher and break the cycle of trying to fit in with everyone else, the benefits are enormous.

“The Beatles didn’t invent teenagers but they showed up to lead them,” he says.

Godin says as a society, we teach individuals not to fly too high or too low but the world needs more leaders with hubris.

“[But] you don’t have a job, you have a platform. A microphone is being given to us.

The artist, or entrepreneur, is prepared to say “this might not work” but they will give it a go anyway, says Godin.

“If you’re just painting copies, we can find someone to paint cheaper copies,” he says.

Godin spoke about the “tension” that is created when individuals don’t understand how something works, or are faced with something that challenges them. Even a simple magic trick will put individuals outside of their comfort zone.

But successful entrepreneurs embrace the uncertainty or fear that comes from a challenge and take advantage of it.

“To do art is to say it might work or it might not work at the same time,” he says.

8. Shut out the negative voices

While Godin says it’s important to take feedback on board, he says he doesn’t know any author who would read nasty reviews of their books on Amazon and then agree to change their writing.

“It’s not for them,” says Godin, who says the goal shouldn’t be to create products for the “normal people”.

“It’s essential to cater for the weird,” he says.

9. Be prepared to fail

“If failure is not an option, then neither is success,” says Godin.

“It’s the danger that makes things worth doing.”

Godin studied business at university close to 30 years ago and he said his classes were filled with would-be entrepreneurs who lamented they were not ready to take a leap of faith.