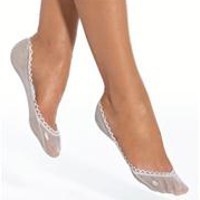 A woman in the US has brought a class action against a hosiery manufacturer, claiming the stockings she purchased failed to give her the “orgasmic” experience that was suggested in an advertisement for the product.

Meng Wang, of Queens in New York, is suing Gildan Outerwear, the Canadian parent company of Kushyfoot, claiming she was misled by a sexually suggestive commercial for Kushyfoot Shaping Tights products, reports the New York Post.

The suit follows legal action against Reebok in Australia, which was last year forced to pay $350,000 for making false and misleading representations about the fitness benefits of its EasyTone shoes.

According to the reports, Wang purchased the stockings for $US7.64 after seeing an ad featuring a woman who appeared to be having an “orgasmic” experience as she walks down the street wearing the product.

The woman says “That’s the spot!” and “Oooh, yes!’’ while background music features the lyrics “I feel satisfied”.

Wang’s lawyer, CK Lee, told The Post the ad was “supposed to indicate that she’s getting a massage through her pantyhose” but the product turned out to be “just socks”.

The product’s online description says the stockings have a “massaging sole for extra comfort”.

According to The Post, there are more than 100 plaintiffs in the Kushyfoot case, who claim they’ve spent more than $US5 million on its products. It is not clear what damages they are seeking.

Narissa Corrigan, principal at Ampersand Legal, told SmartCompany these types of consumer-style class actions were not common in Australia.

“In Australia, this is not the way consumer-type action is taken,” says Corrigan.

“If something like this was to happen here, this would go through Australian Consumer and Competition Commission. Consumer-style class actions are really a US thing.”

Corrigan says while local consumers are somewhat protected by Australian Consumer Law, small businesses do have to be careful with claims made in advertisements about the features and benefits of a product.

“If similar claims were made here, suppliers would need to make sure claims about the features and benefits were credible and substantiated,” says Corrigan.

“If they [small businesses] are going to be making those claims, they need to have evidence. Reebok recently got in trouble for this, $350,000 worth of trouble. The ACCC is hot on these issues and I imagine the bigger, sexier type companies are sitting ducks for an investigation.”

SmartCompany contacted Gildan Outerwear but did not receive a response prior to publication.