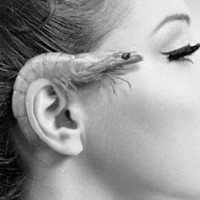 Melbourne-based hearing aid retailer Victorian Hearing has been ambushed on social media over its response to criticism of its most recent billboard ad.

The online backlash broke out after Victorian Hearing launched the ad featuring the image of a woman with a prawn behind her ear, with the text ‘Hearing aids can be ugly’.

Almost 100 users posted damning criticism of the ad on Victorian Hearing’s Facebook page, many of which were parents whose children struggled with wearing hearing aids.

“Your ad is disgraceful. I have a 16-month-old with hearing aids, he can’t have invisible ones. Nothing about him is ugly,” said Facebook user Pinar Kozan-Knox.

“Narrow-mindedness is ugly. Hearing aids are not. You need to retract the ad and issue an apology. I’m gobsmacked you think this is okay,” said another user Claire Foote.

In response, Victorian Hearing posted an apology and an explanation of the ad.

“Victorian Hearing sincerely apologises if our current invisible hearing solution ad was hurtful, it was certainly not our intention,” said the company.

“However, we are fighting a war with a large population of Australians (1 in 5) who refuse to seek hearing amplification because they are embarrassed,” the apology continued.

“Our goal and intention is to help those with hearing loss who are not seeking help due to the stigma … With this being said, we will be mindful of imagery and messages sent in future campaigns.”

But Victorian Hearing’s justification further stirred the ire of Facebook users, who suggested the company should have delivered an unreserved apology.

“A sincere apology says sorry we were wrong. Yours says, sorry, but we were right. A missed opportunity to hear the message of the community. You have clearly missed the point!” replied Facebook user Renée McVicar.

Speaking to SmartCompany, Victorian Hearing manager Nicole Bowden agreed the company had missed the mark with the apology.

“I just wanted to explain where we were coming from,” says Bowden.

“But it became clear people wanted an outright apology, so we will now issue that.”

Bowden says the imagery was intended to grab attention to promote Victorian Hearing’s new invisible hearing aid product, Lyric, and was targeted at an adult audience.

“On average it takes seven years for someone to do something about hearing impairment because they are concerned about cosmetic issues,” Bowden says.

“[The ad] was not aimed at kids… In no way were we trying to offend anyone.”

Bowden says she has since personally responded to numerous email complaints.

“From those responses [to the email apologies], I’ve had people say, thanks, I can see your point of view and I can see their point of view. I’m just sorry that it hurt anyone.”

Digital marketing expert Michelle Gamble, from Marketing Angels, told SmartCompany SMEs will often feel the need to explain themselves when they talk off the cuff to their customers, but it can “make a bad situation worse” if they rationalise too much when apologising.

“The learning for these guys is, if you have offended people, and particularly your target market, you need to rush out and instantly apologise without trying to explain yourself,” Gamble says.

Gamble says it is always a wiser move to focus on the positives in your advertising message rather than the negatives and recommends thoroughly testing ads with staff and advisory boards before taking them to market.