The source of a viral video that sparked debate over its authenticity this week has been revealed, with Australian production team The Woolshed Company creating the clip as part of a marketing campaign for the Hawthorn Football Club.

The Woolshed Company has been responsible for a number of viral videos in the past, with this recent one being the company’s ninth clip to successfully dupe media outlets worldwide.

The video features a hawk dropping a live snake on an unsuspecting Asian family enjoying a barbeque by the Yarra River in Melbourne.

Many comments on the video speculate as to the video’s authenticity, with Fairfax also speculating the video was one of Woolshed’s works. Dave Christison, managing director of The Woodshed Company revealed to Mumbrella yesterday that the video is Woolshed’s work.

Speaking to SmartCompany, Christison says since revealing the video is for Hawthorn’s finals campaign, views across all platforms have doubled, going from 5 million to 10 million views overnight.

“We had a pre-existing relationship with the Hawks, but we haven’t had the opportunity for a project with them until now,” Christison says.

“They contacted us about using viral videos to create some buzz about their finals campaign, with the key objective of getting the Hawks in the news.”

The video itself is not immediately obvious as marketing for the AFL team, with the only clue (apart from the hawk itself) being a Geelong Cats sticker on the family’s esky.

This alludes to Hawthorn’s impending finals match with Geelong next Friday, and the video itself is promoting the club’s ‘Embrace the Hunt’ theme. 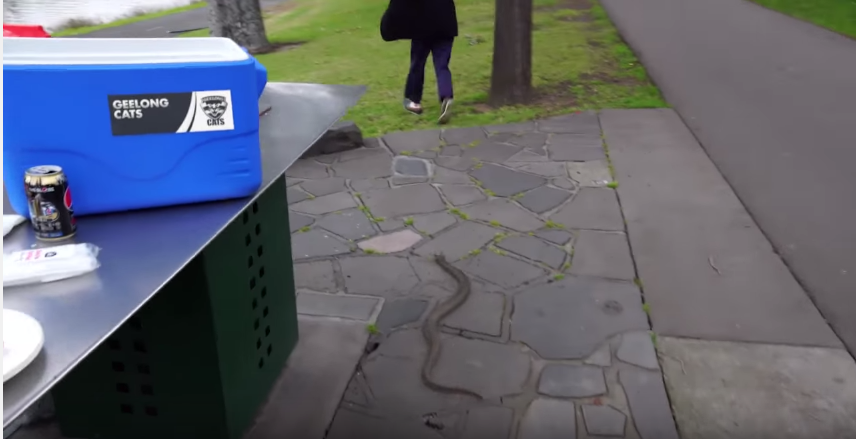 What makes a video go viral

Christison believes viral marketing gives brands an opportunity to reach a massive audience even when working off smaller budgets, saying working on them is “really exciting”.

“It just shows the potential; Hawthorn didn’t have that much ad spend but they’ve reached millions,” Christison says.

Christison welcomes the debate over the videos’ authenticity as he believes creating a debate about the video is a key part of viral marketing.

“The video has to have some unbelievable aspects to it, as the conversation and debate about it propels it moving forward. In this case, it was a bit of shonky CGI work which gave it away,” he says.

“Imperfection can be allowed to slip through the cracks as it creates discussion and debate.”

This is one of Christison’s “key learnings” when it comes to doing viral videos right, which he has picked up over the company’s extensive viral marketing experience.

“Firstly, you have to treat these things like entertainment. That comes down to a basic story with a beginning, middle, and ending,” Christison says.

“Secondly, it has to be short, snackable content with an effective hook. ‘Hawk drops snake on family’ – it’s an idea that’s compelling and condensed.”

Businesses hoping to get in on the viral game might find it time-consuming, as Christison says there’s a significant difference between shareable and viral content.

“Any brand can make highly shareable content, but the viral side requires a lot of time and effort,” he says.

In a statement, a Hawthorn spokesperson said the aim of the video is “to create a real buzz around the launch of our seventh consecutive finals campaign and really get people talking”.

“We wanted everyone to know that it’s September and the Hawks are on the attack, and hopefully we’ve succeeded,” the spokesperson said.

“Hopefully we haven’t scared too many people off a BBQ by the Yarra.”

SmartCompany contacted the Hawks for further comment but did not receive a response prior to publication.