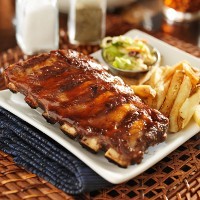 A restaurant chain is the latest Australian company to face criticism over its “sexist” advertising material following a campaign by activist group Collective Shout.

The group previously behind campaigns against the ads of a Perth coffee roasting company and razor brand Schick has launched an attack of The Bavarian Bier Café over an ad featuring the phrase “We’ve got the best racks”, which pictures two women wearing low cut dresses sitting beside a man in a suit.

The ad promoted breast cancer charity The Treasure Chest, saying $1 will be donated to the charity for every rack of ribs sold.

An online campaign against the ad says the content treats “women like meat” and calls for Collective Shout’s members to complain about the ad to the Advertising Standards Board or post their objections on The Bavarian Bier Café’s Facebook page.

“The fact that in 2014 this company thinks comparing women to meat is acceptable is our main objection,” Caitlin Roper, Collective Shout spokesperson, tells SmartCompany.

“We are critical of an ad demeaning and objectifying women in order to promote ribs.”

She says this ad is the latest in a series of sexualised advertisements by the company and believes it is “hiding behind” the breast cancer campaign in this case.

“The Bavarian Bier Café has tried to justify it by throwing a tiny amount of money to charity,” says Roper.

The Bavarian Bier Café’s parent company Urban Purveyor Group has since withdrawn the visual of the ad across its restaurants “out of respect for those offended”.

“It was never our intention to offend our valued customers, particularly women,” the company said in its statement.

“The campaign is designed to raise money for an extremely worthy cause to which we remain committed with $ 1 donated from every rack of ribs sold going to the charity, Treasure Chest, who seek to decrease the waiting time for breast reconstruction in partnership with the Royal Women’s and Royal Melbourne Hospitals.

“Urban Purveyor Group have raised over $65,000 to date across Australia and are proud to be associated with such a critical cause impacting on thousands of women across the country.”

Roper also says the advertising material of the company raises questions about the work environment of the café for female employees.

“Do they have to endure references to their ‘racks’?” she says.