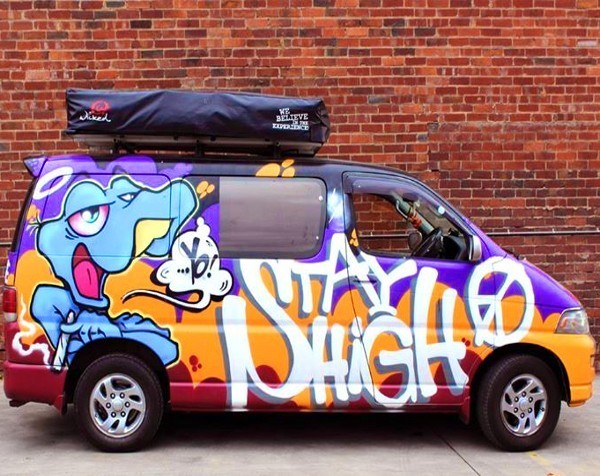 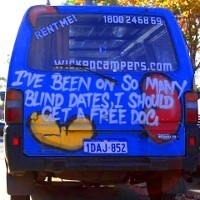 Wicked Campers is under renewed pressure to change its advertising, after a protest against the van hire company was staged in Brisbane on Saturday.

The “Wicked Pickets” group gathered in the Brisbane CBD to publicly call on Wicked Campers and its owner John Webb to remove “offensive and dangerous” slogans from the company’s vans.

“Wicked Campers is a tourist van company, owned by John Webb, that promotes violence against women because they denigrate and objectify women,” said the organisers on the protest event Facebook page.

It is just the latest push to force the company to change its controversial advertising strategy, after an online petition in July 2014 led to Wicked Campers apologising and removing a slogan that said: “In every princess, there’s a little slut who wants to try it just once”.

But despite a pledge from Webb to petition organiser Paula Orbea that Wicked Campers would change “slogans of an insensitive nature”, the company continues to fall foul of the Advertising Standards Board for the slogans.

Liz Upham, one of the organisers of the Wicked Pickets protest, told SmartCompany around 100 people attended Saturday’s rally, while supporters from across the country pledged their support via the group’s Facebook page.

Upham says plans are underway for a national event sometime in July but the group’s attention is now focused on meeting with Queensland’s Attorney-General Yvette D’Ath in order to try to find “some sort of legal channel that has teeth so [Wicked Campers] will be fined if it doesn’t do the right thing”.

Lauren Rosewarne, a senior lecturer at the University of Melbourne and an expert on sexuality and gender in advertising, told SmartCompany while public protests may gain mainstream media coverage, the only thing that will force Wicked Campers to change its slogans is if governments get involved.

Rosewarne says given the nature of Wicked Campers’ mobile form of advertising, it “exists quite separately from what [advertising] self-regulation is supposed to cover”, likening it to a case in Victoria around 10 years ago in which a brothel owner was able to get around outdoor advertising concerns by placing its ads on the back of motorcycles and cars.

But Rosewarne warns any government action on Wicked Campers could have ramifications for other business owners.

“It’s a tricky situation because a whole lot of people who think the slogans are quite tacky, myself included, are people who are not going to argue for the government to have a greater hand in advertising,” she says.

“We have to be careful. By arguing the government should have a hand, they think governments should have the power to control advertising content.”

However, while Upham acknowledges the right to free speech, she says a potential legal solution could include prohibiting individual offensive words or images, like those used in Wicked Campers’ advertising.

“Some of the slogans are in breach of general community standards,” she says.

Upham says there is “no leniency” for public comments or advertising that promotes racial hatred and “it should be the same for the hatred of women, which [Wicked Campers’] slogans promote”.