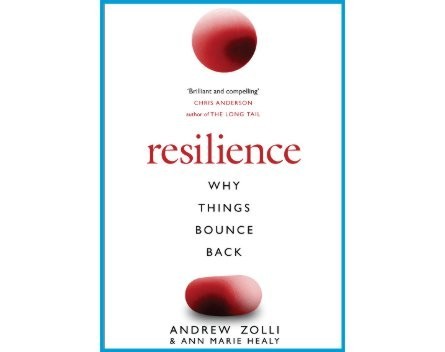 Resilience: Why things bounce back by Andrew Zolli and Ann Marie Healy.

You are well into this book when the authors raise a question that many of us wonder about: why do some people easily recover from trauma while others can plunge into deep depression or dangerous behavior.

Studies quoted here suggest almost half the people facing emotional difficulties, like severe personal loss or major traumatic events such as September 11, recover by their own resources.

The book offers a number of reasons, some of them basic. Some people just have a genetic predisposition to optimism, largely a result of higher levels of telomerase in their immune cells. That’s an enzyme that ultimately enhances a sense of wellbeing.

But we can do things about that. Meditation, among other things, directly increases telomerase activity. These days the verdict is pretty much in as far as meditation is concerned. It is now widely accepted as improving people’s sense of purpose, reducing negative emotions and, to the extent it lowers blood pressure, even promoting longevity.

Exercise also helps, but so do less tangible things like having a high functioning network of friends and associates or even solid religious beliefs. Such beliefs need not be dogmatic, but a sound spiritual awareness can be a powerful defence against emotional breakdown.

So too for systems other than the human one. This book traces the intricate connectivity that assists the resilience and survival of anything from coral reefs to urban ghettoes. There is a lot we can learn from their structure.

The authors define resilience as “the ability to adapt to changed circumstances while fulfilling one’s core purpose”. They don’t say that this means recovering to the original state. Survival may require that there be fundamental changes in the way we go about things. The measure of resilience is rather the extent to which the core purpose remains solid.

In broader terms, what helps are things like diverse input. While powerful engagement and strong bonding can be powerful in its own right, there is a tipping point where it turns into stultifying groupthink. In the words of the authors, once entrenched it “punishes individual efforts to attempt cooperation across enemy lines.” We need contrary opinions to generate creative solutions.

Lack of contrariness was among reasons given why the heads of major banks in the US failed to embrace a more resilient response to the financial meltdown following the Lehman Brothers collapse.

In some ways it was also behind the build up of enormous leverage in the financial system. There was so much momentum in the mortgage bond and associated markets that virtually all players were following the same strategy. When the music stopped, the vast majority were trying to unwind identical positions, for which there were no buyers.

It’s this interconnectedness and counter-party risk that increases not just the riskiness of your own business, but the risk of your exposure to the system as a whole. That’s hard to recognize, let alone measure.

What can we do about it?

The authors essentially argue for agility. Bureaucracy is useful only up to a point before it becomes counterproductive. What’s needed is for more flexibility and self-sufficiency at the local level rather than one-size-fits-all policies imposed from the centre.

Structurally, it favors a modular approach to business organization such that problem areas can be isolated rather then become infectious. Equally, crises can be managed by rearranging the modules or bringing in new ones.

They stress the importance of swarming when the time is right, not unlike cloud computing, where appropriate resources flock to handle specific demands then disengage and move onto other operations as required.

This, in turn, calls for more diverse networks of people with different skills and perspectives – something that brings us back to the definition of resilience. It’s an approach the book calls “strategic looseness” – in which “a mix of fluidity (of strategies, structures and actions) is coupled with so-called “fixedness” (of values and purposes).”

These are all good words, but much of it can be summarized in the notion of flexibility. It is widely accepted that change seems to happen more quickly today. That may be the case. But flexibility has been around for a while.

That’s the core message of this book. That having a strategy may give you some direction and structure, but to cope with rapid change, you need be open to diverse perspectives.

You need access to a range of resources and you need to be able to apply them quickly. The strategy may state the core purpose, but along the way, it is the flexibility to make a quick tactical response that determines your resilience.

All nice ideas. The next book on this subject needs to be about how to do it.