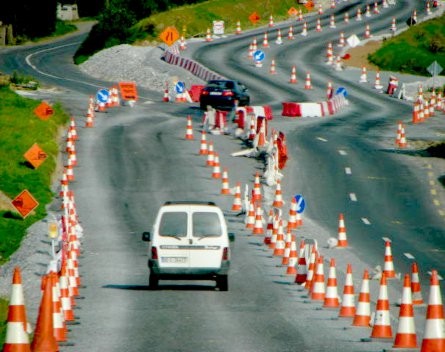 I had been making good time travelling to an appointment; however, as I came around a corner I was confronted by road works. I had planned my trip based on everything going well and road works were definitely not in this plan. Worse still, these were serious road works with workers holding stop signs and traffic banking up.

As many of you know, I took the challenge earlier this year to run 5km and decided to use the smartphone app Couch to 5K. Being a positive person, I expected to just follow the program exactly and magically achieve my goal. I was not prepared for the struggle at the 3km mark and seemed to hit the wall.

I find no matter what I do in life, in business or sales, challenges occur. It may be as simple as road works or hitting the wall in a running program. Sometimes it is a prospect saying “no” and sometimes it is something life threatening. It is not the fact a challenge happens which determines success; it is how you deal with the challenge.

Okay, so the road works meant I was going to be late. I had a choice:

Of course I chose the latter. In fact, I stopped, knowing I would be even later, and called my prospect explaining the situation. Much to my surprise they were human and understood. In that moment, stopped at the side of the road, I established rapport with my prospect and when I finally arrived closed the opportunity.

I approached the 3km mark and I could feel the chemistry of my body telling me, “There is no way to go past this point.” In this situation, I had a choice:

Of course I took the latter course. Over the next few days I increased just 100 metres more each time. Yesterday, I ran my first full 5km with a bit in reserve.

So your client says “no” – what next?

I have found my prospects are more likely to say no when I have become too sure of myself and I have not taken the time to build rapport. When someone says no it is for one of two reasons:

“No” is like road works or hitting the wall when running. It stands in the way of a decision to buy from you.

I like to ask a simple question to test the situation, something like: “I understand what you are saying. Many others have made the same decision only to buy from me later with outstanding results. What about the proposal needs more clarification so we can discuss this further?” (This is a ‘sharp angle’ close, so be ready to make this specific for your situation.)

Of course, if I have tried to shortcut the sale without building rapport, it is usually obvious by their body language and cold words.

Road works and blockages are an everyday part of life. Here are two things you can do to move a decision forward:

Make every step, even the ones you find difficult, count. When you hit the wall it is a matter of just taking that next step, and before you know it, the “No” turns into a sale or a positive decision.

Have a great week!