Running an airline is a torrid business. Pandemics, fuel costs, intense competition. As Warren Buffet observed in 2007: “The worst sort of business is one that grows rapidly, requires significant capital to engender the growth, and then earns little or no money… think airlines.”

There is however one part of airlines that had quietly become an extremely good business: loyalty schemes, which have become the world’s most (and probably, only) profitable cryptocurrency. Even with fleets grounded during COVID-19, loyalty continued to generate significant profits for airlines. It has become one of the world’s biggest bait and switch schemes. But we’ll get to that.

First is a ‘status’ component. This is where you get status levels the more you spend with an airline — think Qantas’ Platinum level or Singapore Airline’s PPS Club. That element is a fairly straight forward platform where airlines give their best customers soft benefits that don’t cost them much (like making it easier to upgrade, up-front seating or premium lounge access).

Arguably the main benefit is status holders love to boast about their ‘platinum’ or ‘diamond’ status to other people (of a lower status). Status is a powerful customer retention tool but not really a direct money maker for airlines.

The other part of loyalty programs — their point trading arms, is the profit-making machine. It originally involved airlines giving customers points when they flew (hence the term “Frequent Flyer Miles”), with customers then able to redeem their ‘miles’ on unsold seats.

Around 20 years ago airlines realised they could rent their loyalty platforms to other businesses, most notably banks and credit card businesses (the most significant being American Express).

Banks and Amex buy points from airlines (the biggest ones like ANZ Bank or Amex would spend about a cent per point) and give points to customers for making purchases.

Banks cap point earnings tightly but Amex can be uncapped (Amex funds those points by charging a higher merchant fee to its clients).

Hence, whenever you get a point for spending $1 on your credit card, airlines earn at least one cent of revenue.

The airlines then create an arbitrage between the money they earn from selling points (not only to banks, but also to other businesses like BP, Woolworths or Kogan) and what customers receive when they redeem those points to purchase flights or buy stuff, like iPads or kettles.

Airlines give a fantastic redemption rate on premium cabins like First and Business class (valuing points at around 5 cents each, if you have enough points to afford it). Economy class redemptions are kind of OK (around 1.2 cents per point), anything else, like iPhones or ‘Points Plus Pay’ seats have a terrible redemption rate of around half of one cent (and slightly higher for ‘Points plus Pay’). The reason airlines historically gave a great redemption rate on seats was because planes traditionally didn’t fly full, so the marginal cost to airlines was relatively minimal.

Airlines can generate a gross margin of more than 80% when customers redeem for marketplace items (like iPads) or ‘points plus pay’ redemptions, and a lower margin on reward seats. Especially now given airlines are running less flights and selling out planes.

This is where loyalty programs have essentially become a giant bait and switch.

Airlines around the world have made a fortune in selling points during the pandemic. Even though people weren’t flying much, they were still buying lots of stuff on their credit cards, and earning points, which generated lots of income for airlines.

Now, with borders open customers want to use those points on flights. What has basically every airline done? They’ve made it almost impossible to redeem for business or first class seats (or in the case of Emirates, made redemptions more expensive). Customers who have accumulated hundreds of thousands or even millions of points in good faith, are now realising those points are worth a lot less than they previously thought.

In the airlines’ defence, they were forced to ground their fleets due to government decree and haven’t yet brought back entire fleets, so they remain supply constrained and are seeing a wave of demand. So on one hand, airlines would be forgiven for trying to maximise their yield in premium cabins. On the other, they made billions of dollars selling points that have now significantly depreciated in value.

Qantas, which was never overly generous with premium international redemptions even before COVID-19, have almost no upgraded seats available in the next year. Here’s what happens when you try to book a single seat to LA in June 2023: 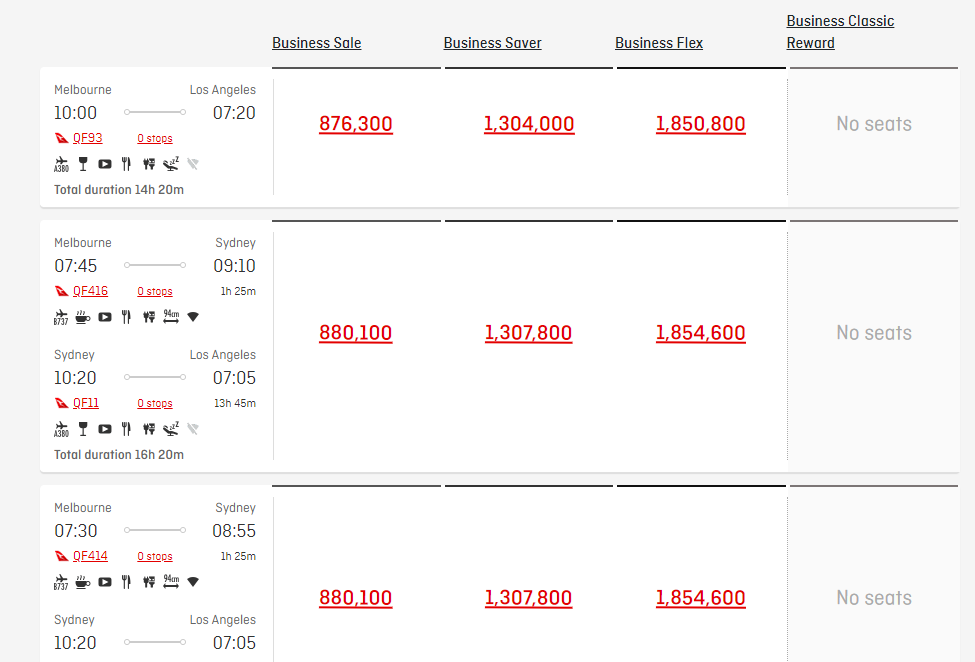 Qantas admittedly are one of the few airlines (alongside Virgin) which don’t expire customers’ points (so long as they have transacted in the past 18 months), so at least members can wait it out for supply to return in the next few years. Also, Qantas have plenty of reward seats available domestically, so they’re probably the least bad option.

Pre-COVID Singapore Airlines was not only one of the highest rated airlines globally but also made it relatively straightforward to redeem points in premium cabins. Not anymore. Singapore appears to have dramatically curtailed premium redemption seats available, even six months out. Even worse, Singapore Airlines points expire after three years, so people who have earned points may not be able to use them:

Cathay Pacific is another airline which was historically popular with frequent flyers. With the CCP destroying Hong Kong as a transit hub and tourist destination (in the near term) Cathay are barely flying and hence, physically not able to offer redemption. Even worse, Cathay continue to expire customers’ points while they are barely flying: 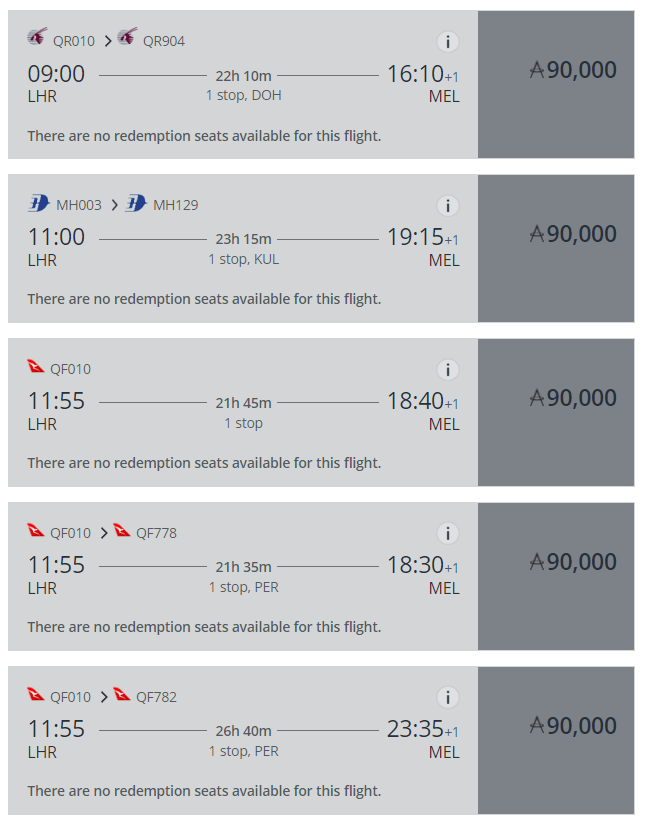 British Airways take the prize though. The airline, which has in many respects, become a low-cost carrier like competitors EasyJet and Ryanair has now removed basically all premium cabins for redemption, even a year in advance. BA recently offered a 40% bonus to convert American Express points to BA’s Avios Points, a great strategy given customers are barely able to use their newly converted points:

The value of a loyalty scheme derives from the utility it provides to end users. If users can only redeem points for low value products like kettles or iPhones or economy flights, the value of earning points and hence the schemes themselves are reduced. While in the short term airlines capping redemptions in favour of lucrative cash sales is tempting, in the end, given how important loyalty schemes have become to airlines, it may be value destroying.

Adam Schwab is the co-founder of The Lux Group and author of Pigs at the Trough: Lessons from Australia’s decade of corporate greed.

Adam Schwab: How Philip Lowe’s failures could help send Australia into a recession

Inflation and rising interest rates are pushing Australia towards a likely recession. And on the list of culprits, RBA governor Philip Lowe is very near the top.

In five years, we will look back fondly on the BNPL sector much like we reminisce on the follies of the mid-2000s bubble like Babcock & Brown or Allco, or the dot com insanity of 1999, says Adam Schwab.

Your article states that Qantas don’t retire point – but they retired my 200,000 Qantas FF points a few months ago, stating that I hadn’t flown in 2 years and therefore the points were being retired. There was no consideration shown for the fact the last 2 years we have been trapped in Western Australia largely unable to fly interstate for fear of being locked out with closed state borders at a moments notice. I’m furious. I was a Platinum FF for 4-5 years, Gold/Silver for another 10 years. Now – I will seek every available alternative before flying Qantas again.