As CEOs, before March 2020 we dealt with resource allocation decisions to satisfy the many stakeholders of our businesses every day. Those decisions now appear quaint, as the pandemic has put what we all thought were difficult problems in a very different perspective.

Few Australians think we should ignore the dangers of a virus that, until recently, was more dangerous than the occasionally lethal influenza. For the unvaccinated elderly, especially those with pre-existing conditions like hypertension, diabetes or obesity, COVID-19 remains a genuine risk.

Fortunately, scientists created a series of vaccines in record time that have reduced the risks of hospitalisation and death by more than 90% across a sample size of literally billions.

Data from the US, UK and Europe indicate that vaccines have been able to reduce COVID’s fatality rate to less than that of influenza. In the US, the CDC stated that 99.5% of recent deaths have been among people who were not vaccinated. Vaccines have been so effective that liberal democratic countries like Denmark, Norway and Germany have removed almost all restrictions after vaccinating a similar proportion of its population as NSW.

While Australia’s rollout began slowly, we are rapidly catching up, with NSW vaccinating people at world record pace. Critically, in NSW more than 95% of the ‘at risk’ 70-plus age group have had at least one dose and 80.1% are fully vaccinated, with Queensland and Victoria not far behind. By the end of October, it is likely that 38 million vaccine doses will have been administered, that is equal to around 76% of all people — a level reached by no country with a population of more than 11 million.

Public health experts around the world, including the WHO, Public Health England and the Centre for Disease Control in the US, have stated that while strict interventions like lockdowns and borders closures may reduce the transmission rate of the virus – they come at a huge cost. The longer we continue with lockdowns and closures, the more these costs grow. Meanwhile, as we vaccinate most of our population, the benefits of these strict interventions completely evaporate.

Our travel sector employs a large number of young team members. Our teams are brilliant at dealing with complex challenges and solving problems for customers – that means to survive in the travel sector, you need to develop strong resilience. But from first-hand experience, it is clear that almost two years of rolling lockdowns have caused an unprecedented wave of mental health issues that are truly scary. These devastating issues range from loneliness and depression to far worse.

Lifeline is reporting more than 3,500 calls each day, while Australian of the Year and mental health expert Pat McGorry last month warned that mental health has become the “shadow pandemic”, with teenage girls being hardest hit.

And it’s not only Australians that are suffering.

A combination of our economic success and a natural curiosity has meant that Australians have become the world’s most frequent and generous global travellers. But while locking borders is frustrating for us, it’s genuinely disastrous for our friends in places like Fiji, Bali, Thailand or Vietnam.

Before COVID, tourism contributed almost 40% of Fiji’s GDP and the subsequent loss of income has been devastating. Poverty levels have skyrocketed in the island nation, with many Fijians struggling to access food and drinking water. Border closures have led some to speculate that Fiji’s unemployment rate could have increased from 4% to 36%.

Fiji recently announced that it will allow vaccinated tourists by December, and while the federal government and Gladys Berejiklian are cautiously preparing to allow Australians to leave the country, concerningly, there has been very little commentary around letting Australians return without quarantine restrictions. While seven days home quarantine will be acceptable to stranded Aussies, we know that travellers won’t accept such draconian restrictions.

This is why we urgently need to adopt a full roadmap to reopening, not the Doherty Institute’s ‘semi-plan’ that has been endorsed by National Cabinet. We need a complete path to returning to normal, not a plan which ends at a loose commitment to merely reduce lockdowns.

In July, Flight Centre, alongside other key export industries like the education, events and mining sectors created a Roadmap to Recovery to address these issues. If adopted, the Roadmap would provide certainty to all Australians while also ensuring we can reopen in a safer way than almost every other country on earth.

The first key element of the updated roadmap is an immediate end of hotel quarantine (with the possible exception of very high-risk countries) for vaccinated and tested negative Australians returning home. During August, 79 people tested positive in hotel quarantine, compared to 18,885 people in the community. Australia is no longer the ‘Covid Zero’ paradise of 2020 which many used to justify the wanton destruction in the value of our citizenship. 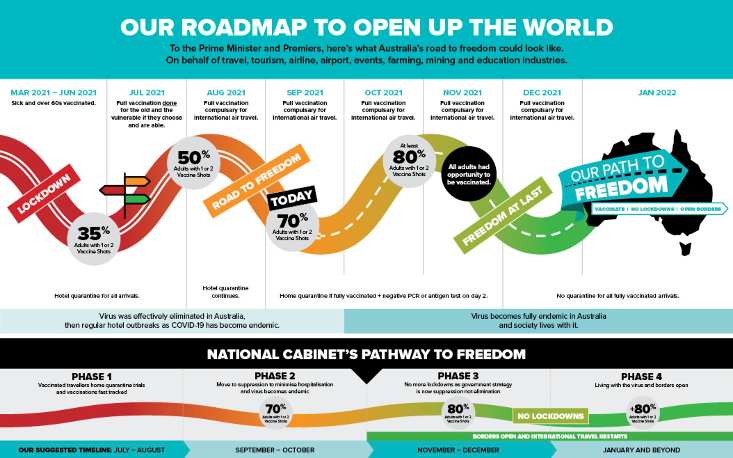 Then there is the still ‘not spoken of’ final step. That is, allowing completely quarantine-free travel for all fully vaccinated and testing negative people entering Australia (perhaps other than for very limited ‘red list’ countries if they prove to be very high risk) from December 1, 2021.

Setting December 1 as a firm date is critical to give Australians genuine hope and to allow firm plans to be made. Based on our current levels of vaccination and the significant increase in vaccine supply during September and October, by then, every Australian adult who wants a vaccine will be able to get one by mid-November. It is difficult to justify continuing such damaging interventions for a small number of people who are happy to assume their own risk.

The western world has moved on from the tragic and destructive consequences of public health interventions chasing the fool’s errand of Covid Zero – it’s time Australia implemented a complete plan to join them.

Impending vaccination requirements for attendance to events, cafes and shops pose a range of questions for staff employed at these venues.

Legal advisors are receiving an influx of enquiries from small businesses about vaccine policies for offices as on-site work in the country’s two most populous states is set to resume in less than two months.

Written by a dinosaur and an anti-vaxxer. Ignore.

Strange comment from Greg. There seems no evidence that either of the authors is ‘anti-vax’. On the contrary, the article references the positive benefits of vaccination several times. Is the accusation, ‘anti-vaxxer’ just a lazy phrase for ‘I don’t like what you are saying’? How about a little more thought with your critique Greg?