How electrifying Australia would give SMEs an abundance of opportunities

The defining theme of climate and energy in the 2010s was sacrifice. But for the 2020s and beyond, it is abundance. For small and medium Australian businesses that translates to lower costs, greater economic demand, and significant export opportunities.

The fastest and cheapest path for the world to decarbonise is the electrification of almost everything, powered by renewables. No nation is better placed to seize this opportunity than Australia. We can reap the benefits first and then sell our knowledge to the world.

Daniel Petre: The federal government won’t act on climate change, but the tech industry will

We already have a massive lead with rooftop solar. In fact, Australia is currently the only nation in the world capable of powering itself exclusively with renewable energy while taking up less than 1% of landmass with solar and wind farms.

To really ram home this advantage we need to accelerate the replacement of devices powered by coal, gas and petrol with ones powered by renewable electricity. This means fitting every home and business with a battery, replacing gas heating and cooktops with heat pumps and induction stoves, and internal combustion engines with electric vehicles.

Getting this right, and doing it first, will allow Australia to develop a competitive advantage that drives significant export earnings.

Consider a firm such as Tritium — the Brisbane-based manufacturer of electric vehicle chargers that can add 350 kilometres of range in 10 minutes. Tritium is now equipping highways all over North America and was last week lauded by US President Joe Biden. There are many more potential Tritiums that can work at the cutting edge of everything from community batteries to financing the transition.

Much has been made of the benefit Australia receives from fossil fuel exports. Less is made of how much we pay other countries for fossil fuel imports. But our reliance on foreign oil constitutes a $40 billion annual drain on the domestic economy. If we can end this, small and medium enterprises will enjoy a twin benefit: removing the unpredictable claim on monthly cashflow that petrol-powered business vehicles create, and greater economic demand from consumers with additional spending money freed from the bowser.

Rewiring Australia modelling last year found a five-year, $12 billion investment in electrification would generate household savings of $78 billion by the end of the decade, and more than $300 billion by 2035. This would create a profound expansion of consumer spending in the Australian economy, and the electrification itself would be delivered by an army of small businesses and skilled trades that rewire and re-plumb homes and businesses.

Australia should set its sights high. We have every natural resource advantage at our disposal. If households and businesses commit to the path of electrification we can decarbonise our domestic economy this decade, and give rise to technology companies that will lead the world in the revolution of abundance. 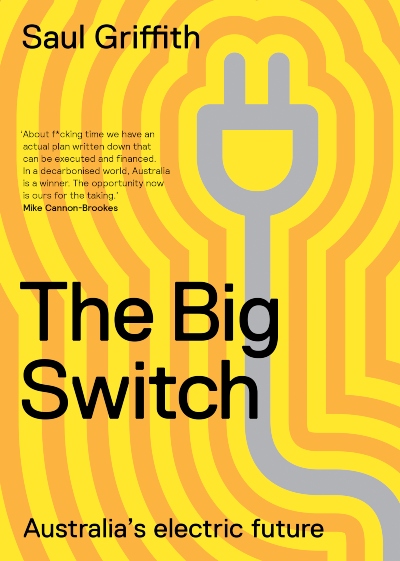 The Big Switch by Saul Griffith ($24.99) is out now through Black Inc. Available online and in all good bookshops.

‘Increasingly stupid’: Coalition’s reluctance to cash in on EVs slammed by Labor

A new report from the Carmichael Centre suggests Australia faces an enormous manufacturing opportunity in reviving the car industry with EVs.

ReGen has closed its first fund, pegged for early-stage investment into audacious startups that are “restoring the planet and human health”.

Why impostor syndrome has its advantages
Boosting Female Founders: 10 tips on how to apply for the grant
Behind Adore Beauty’s loyalty program helping drive $113.1 million revenue in just six months
Bring your “A” game: How to improve your marketing management
What is SmartCompany Plus?