Mid-session during ASX trading on Monday 3rd March this year, Gold started to spike higher. The push north was sustained (and added to) during U.S and European trading.

2013 was certainly a forgettable year for Gold and precious metals in general. Yet as we know, a market ‘dog’ one year can just as easily revert to a market ‘darling’ the next.

The jury is still out as to whether Gold has reached its low. Commentator’s predictions range anywhere from new lows still likely to be seen in 2014 through to both Gold and Silver hitting new highs before the year is out.

Yes, that’s what some commentators are calling: Gold above $2000 and Silver back above $50. Sounds crazy, yet this is the type of banter that keeps everyone guessing.

More immediately though, it does appear that Russia sending troops into Ukraine’s Crimea region recently is creating a huge amount of tension and overshadowing China and Japan’s ongoing staring contest over island ownership. Geo-Political issues around the globe are certainly likely to keep Gold on the boil, at least over shorter-term time frames. 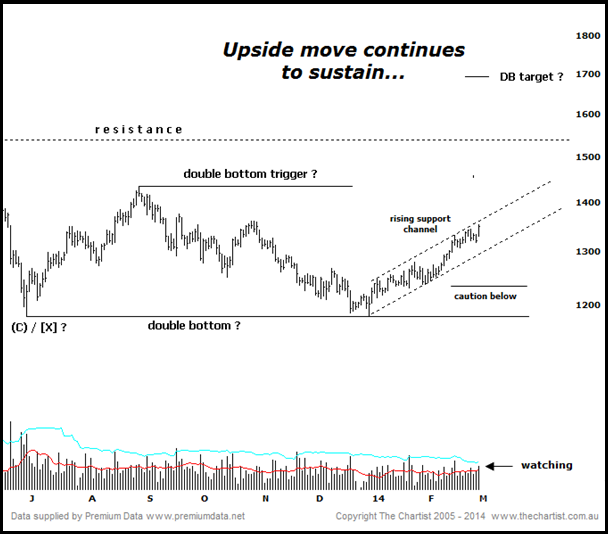 Above is a daily price chart for Gold. From a technical perspective, the bigger picture pattern we are patiently waiting to trigger is the Double Bottom at 1180, with the trigger point being a move above 1435. If such a move evolves, then our initial target is up around 1690 – a move that would be very encouraging within our longer-term bullish analysis, as it would see price sitting back above the old line of strong support circa 1540, which is now acting as a line of resistance.

Therefore if the price does get to the proposed double bottom target, all eyes will then be on whether it can rise above support/resistance. If it can, then the bullish argument will start to get traction.

If events throughout the world do start to boil over, not only will Gold prices remain well supported, an even stronger momentum build may start to take shape as short covering becomes a necessity.