How Ai Mawdsley changed careers while pregnant – and what she learnt 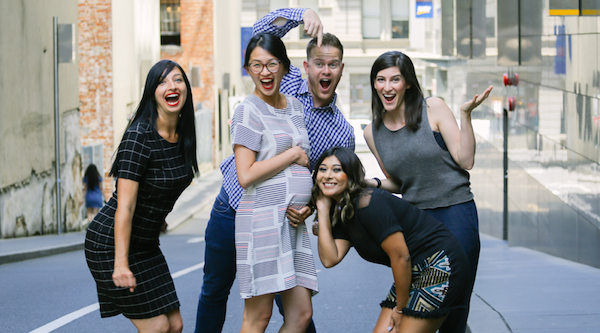 A couple months back, an agency I admired was hiring for a general manager. It was exactly the sort of role I pictured myself in. A new challenge, an awesome company, and my skills and experience matched what they needed.

But … I was four months pregnant.

It was my husband who called me out. He said, “If you really want to do this, go for it! Propose something. The worst thing that could happen is they will say no”.

He was right. I wanted it.

So I contacted Richenda Vermeulen, the chief executive of ntegrity, expressing my interest in the role and desire to meet to “explore what was possible”. She said yes!

During the interview, I walked through my skills, experience, qualifications, and why I was interested in working for ntegrity. I also flagged that, yes, I was indeed four months pregnant.

At the end of the interview process — including an interactive workshop to co-design the role — we both agreed: it was the perfect match!

For both Richenda and I, my upcoming maternity leave was a small blip in time compared to the long-term plans we now share to grow the business. Me (left) and chief executive Richenda Vermeulen. With some cropping and a geometric dress, we hid my bump on the initial press photo shoots.

Here’s how we planned ahead

In working out the employment offer, we focused on both what the role would look like now, as well as post-baby.

For the “now”, we set the deliverables for my first four months of work. We talked through the pain points of the business and set the key areas to focus on. We agreed on a flexible working arrangement, which suited work schedules and childcare requirements, and planned a maternity leave period we were both comfortable with (seven months, if you’re curious!).

Assuming all goes well with me and baby, I plan to monitor some keys areas of the business during maternity leave. This wasn’t requested or required, but subject to good health, I’ll be peeking in on things. It’s too early to know what this will look like — from logging into emails once a week, to working a day or two a month — but we’ll revisit when the time comes. Behind the scenes: The bump!

It might sound strange, but I have found that as a senior leader, pregnancy can be a gift in disguise. My belly reminds me that I will need to step away in a matter of months, which forces me to be organised, focussed, and decisive!

My upcoming leave has encouraged me to build systems that are understood and sustainable. Simply knowing I’ll be away for an extended period of time means that I need to focus on training, upskilling and empowering the team, and making clear “why” we’re doing certain things, not just what.

For example, I have helped to overhaul our agency reporting dashboard. One question that drove the process was: “what would I like to see when I’m on maternity leave?”.

I collaborated closely with the team to ensure adoption of these KPIs — that they understand how they are calculated, why they are important, and also how to plan actions in response.

Empowering the team to run things, strong communication, and clear and available KPIs — these are all things good leaders do.

My pregnancy just adds a deadline to this important work.

This wouldn’t be possible without the support of …

Believe it or not, this is my second major career move made whilst pregnant. (I suppose it gets less scary each time!) These moves were made possible by the following:

A supportive partner: As a working couple, my husband and I endeavour to share childcare, work, and domestic responsibilities equally. Life gets messy, and we don’t always hit an exact 50/50 split, but we’re committed to an equal partnership. We champion each other and compromise together to make it work.

A smooth pregnancy: I’m grateful to have had uneventful pregnancies so far. I’m conscious that for many women who suffer more debilitating symptoms or don’t have an office job, it would be a different story.

A supportive and flexible workplace: Both my pregnancy career moves have been possible due to the support structures in place at both ntegrity (a small business) and Accenture (a multinational conglomerate). This includes leadership who see the value in retaining new parents as employees, colleagues who accommodate flexible working arrangements and paid support structures.

As it’s often assumed that only large companies can support women, I’m especially proud to see small businesses like ntegrity rise to the challenge. With more women in leadership, hopefully, this reality will become more common in companies.

I don’t want to minimise the fact that it is disruptive to any business for an employee to disappear for a few months. But with careful planning and the right mindset, a short-term maternity leave can be in the best interests of a business for the long term.

My advice? Don’t discount yourself

Being pregnant isn’t something that needs to hold back one’s career. Sure, I’m a bit inflated, I need snacks at my desk, and I have a specialty ergonomic chair — but none of that means I can’t get my job done.

I’m not suggesting that pregnancy should inspire you to make a dramatic career leap. Clearly, there’s plenty going on without adding extra stress and pressure.

But if you are at a crossroads or are facing a present opportunity, I want to encourage you: do not discount yourself from a career opportunity simply because you are planning to have a baby.