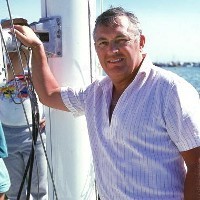 Australia in the 1950s was a simpler place when Alan Bond arrived, a penniless migrant to Perth from the hard streets of London. With little education and few skills, he got by as best he could.

He always seemed to have a chip on his shoulder, perhaps explained by his modest roots. His Swan Lager TV advertisements, made in the 1980s featured the lyrics – “They said you’d never make it, but you finally came through”. The words were a nod to Bond himself – a champion underdog for other plain old underdogs.

He made versions of his Swan Lager ads for other mates who were laughed at and pilloried by the establishment, including Daryl Somers. It was pretty clear who the “they” were in the lyrics – the big end of town, the intelligentsia, lawyers and unfriendly politicians.

Originally working as a sign writer in Perth to make a quid, Bond soon realised the money to be made in property development in Perth’s sprawling eastern and northern suburbs. He learnt early that the price of something and its true value were often very different things. He bought large swathes of land, subdivided them and sold them off for (literally) bags of cash.

Bond was often called an entrepreneur, but that was never really true. Entrepreneurs create wealth by creating value. In the totality of Bond’s life, when all is said and done, his ventures destroyed value, or certainly created very little of enduring value.

His eponymous university on the Gold Coast – perhaps his most tangible legacy – was itself a product of shady intrigue between Bond and his Japanese backers, EIE, mixed up in a property deal that had all of the expected elements of Bjelke-Petersen’s Queensland. When Bjelke-Petersen sued Bond’s Brisbane TV channel in 1983, Bond settled to the tune of A$400,000. Bjelke-Petersen had made it clear not paying up would have consequences for Bond’s business dealings in Queensland. It was graft by any other name – but Bond it seemed was a willing victim. It was corruption hiding in plain sight.

In the truest sense of the word, Bond was no entrepreneur. He was instead a grand arbitrageur – playing between asset and capital markets where value was not well understood. He was always looking for a deal. He borrowed where lenders misunderstood the risks of lending to someone like him, and he had an uncanny knack of seeing assets whose values were misunderstood – and generally underestimated.

Bond was far from selective in what he bought, and indeed what he sometimes paid. In the end, this was his undoing. He bought Van Gogh’s Irises in 1987, in hindsight not a bad investment. When it came to paying up, however, there was no money, so it went on to the Getty Museum in Los Angeles where it still hangs. A great fan of the French impressionists, it was a shady deal involving Manet’s La Promenade that eventually got him locked up in 1996. He may have had the Manet, but he never had the money.

There was no money either when he agreed to buy Channel Nine from the Packers for a billion dollars just before the stock market crash of 1987. The late Kerry Packer once observed that you only get one Alan Bond in your lifetime and indeed that deal, among all of the others, made the Packer family. Bond’s agreement was built on money he didn’t have and so he borrowed and borrowed wherever he could. Bond always understood one way to get rich was on the basis of “OPM” – other people’s money.

Shuffling debts between various corporate entities bought him some time, but also ended up the basis of a major fraud conviction while he was still in prison for his Manet swindle, extending his jail term to almost four years.

The prior events would have chastened and humbled most, but not Bond. When he was finally free in 2000, he returned to business, accumulating a couple of hundred million before his death.

Bond’s lessons for us all

Bond was what social scientists might call an “outlier”. He had extraordinary self-belief which, when coupled with his complete disregard for basic probity, was a recipe for financial mischief. This much was always well known, and yet investors time and again were drawn to his charms like a moths to a flame.

His cosy relationship with corrupt politicians has been repeated many times since his heyday, as recent events at NSW’s ICAC show. Constant vigilance on this front is clearly required in Australia. We consider ourselves an honest and upright nation – far too much evidence, over a long period, suggests otherwise.

As investors, Bond has lessons too. We have been far too forgiving for far too long for crimes which occur in the boardrooms of Australia, despite them sometimes directly impacting our own investments. While this tolerance occurs, the likes of Bond will thrive.

Taken together, Bond’s main lesson for us is that we get the fraudsters and crooks we deserve. While we are tolerant of white collar crime as something less serious than the blue collar type, Bond will provide the archetype for others to follow.

John Rice is a professor of Management at the University of New England and Nigel Martin is a lecturer at the College of Business and Economics at Australian National University.