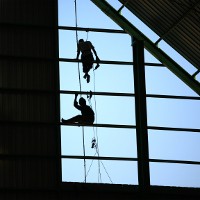 Think being killed by an animal bite while on the job is a bad way to go? Then a career as a plumber or electrician is probably not for you.

This is just one of the findings from research published today which identified truck drivers, posties and warehouse workers as having the most dangerous jobs in Australia.

Comparison website finder.com.au has crunched the latest figures from Safe Work Australia and the Australian Bureau of Statistics, and revealed its list of Australia’s 10 most deadly industries.

Sixty-five transport and storage workers were killed while on the job in 2012, which was almost one-third of all workplace fatalities in Australia.

Coming in at number two on the list was the agriculture, forestry and fishing industry, with 53 fatalities and 3815 serious injury claims in 2012. People working in this sector were more likely to die from drowning or heat exposure than any other industry.

Michelle Hutchinson, money expert at finder.com.au, told SmartCompany the research has clearly shown some jobs are more dangerous than others and employees should stay alert.

“A lot of the most common dangerous jobs were on the list and that wasn’t surprising,” she says.

“Transport, construction, mining and manufacturing are the ones people know are physically dangerous. What was also interesting was other jobs that appeared on the list that people may not realise are quite dangerous, including retail trade at number seven and even professionals.”

Retail – which employs around 1.2 million people in Australia – saw six deaths in 2012, almost the same number of fatalities as the mining industry. The leading cause of serious injuries for people working in retail was lifting heavy objects.

Hutchinson says workplace accidents are not only restricted to jobs that involve handling heavy machinery, and in fact the majority of fatalities that occur while on the job happen on the road.

“It doesn’t matter if you don’t have one of the most dangerous jobs in Australia, you can still be at risk of being injured or killed while at work – especially if you drive,” she says.

“Even if it is just to the station every day… you need to be careful on the roads.”

Retail workers are not the only ones who should be staying alert, with lawyers, accountants, engineers and scientists also making it onto the list.

The professional, scientific and technical services industry saw six recorded deaths in 2012, as well as 2100 serious injuries. The majority of casualities were from car crashes, falling, being hit by falling objects and even electrocution.

Meanwhile, the leading causes of serious injury for professionals were falls, muscle strain and repetitive movements.

The research identified Australia’s top 10 most dangerous jobs as: