Australians tied to work emails while on holiday: Research 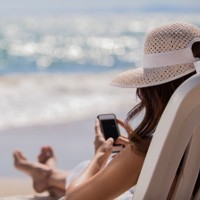 Australians remain tied to their phones and work emails even when they should be on holiday, according to the 2014 Global Mobile Index published yesterday.

The study, conducted by Expedia and Egencia, found more than 70% of Australians admitted to taking their work phone with them on a holiday.

Almost a third of Australians travellers also said they used their smartphone more when travelling than at home – suggesting employees and managers aren’t switching off while away from the workplace.

Georg Ruebensal, managing director of Expedia Australia and New Zealand, told SmartCompany in this day and age getting away from business calls and work emails can be very hard.

“Australians actually struggle a lot in comparison to our global counterparts when it comes to blocking out work while on holiday,” he says.

“Seventy three per cent of Aussies who have a work-paid device admitted to taking this with them on holiday – a statistic which is considerably high compared to the global average of 63%. For those that don’t have a work-paid device, we’re guilty of using one phone for both work and personal purposes, so it’s particularly hard to ignore work-related emails and calls when on holiday.”

Ruebensal says the tendency for workers to “always be switched on” comes from the fact that 96% of employed adults around the world own a mobile device.

“Our survey revealed more than a quarter of Australians claim to use their smartphone more when they travel than they do at home,” he says.

“But many of us want to switch off while on holiday, and not using our phones is one way to do this.”

Martin Nally, managing director of HR Anywhere, told SmartCompany the issue of employees always being on call is almost a generational issue.

“The younger groups buy into it,” he says. “They’ve got all their emails being streamed to the one device.”

Nally says he has one piece of advice to employees unable to ignore work emails while they shouldn’t be working: just enjoy being alone.

“Being alone or having your own thoughts is just a wonderful thing to do,” he says.

“Everyone has the individual control to switch off and I don’t think it’s driven by the employer.”

Nally says it is important for workers to have a break from working while on holiday because it “regenerates their ideas and creativity”. He says a worker who comes back to the workplace feeling refreshed will be more enthusiastic and more likely to come up with innovative ideas and solutions.

“As employers we want to give people permission to have leisure time.”