Most company “winners” which achieve on all fronts are by no means perfect, but they rank highly on compliance because they have found viable ways to motivate their employees and thereby improve the business.

So, how are you going to get colleagues to graduate to corporate “nirvana”?  Well, it’s not the Middle Ages, so old-fashioned reward and punishment tricks are seldom going to cut it.  The majority of human beings these days thrive on relative independence, reasonable income and knowing what they do has meaningful, beneficial ripple effects for themselves and others.

You are far more likely to achieve an emotionally rewarding, galvanised workplace if you adopt these four things when moving them to compliance: 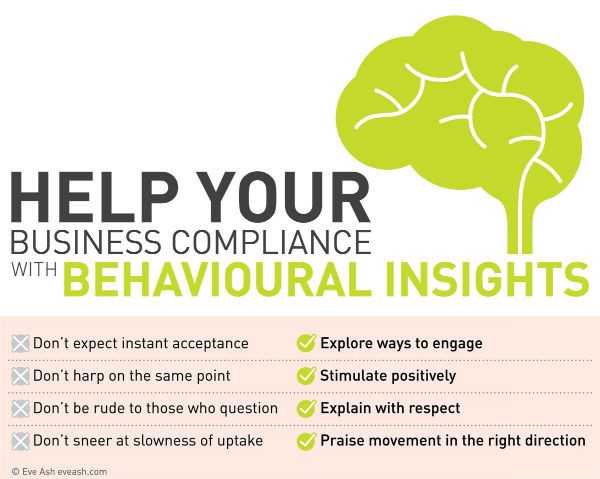 New rules, laws, practices and behavioural norms are filtering into workplaces all the time.  Governments expect some unpopularity whenever a new regime or campaign is announced.   Similarly in business and other micro levels: there’s guaranteed to be some push-back before people accept change.  You will see it when everyone trundles in for a training session and those eyes just light up at the prospect of new compliance requirements.  If you’ve been tasked with instigating something new, explore fun, insightful ways to engage your team.  This might involve planning a “venting session”, developing a trivia competition with prizes, getting each other to play devils’ advocates and filming “pretend TV interviews” then discussing the results. Use humour when reminding people about what needs to be done (at least people will smile when they see what you’re on about).

Don’t harp on the same point. Instead stimulate positively.

Just because you immediately “get” the need for something fresh doesn’t necessarily mean that others perceive the benefits.  It’s a mistake however to evangelise, i.e. keep driving the same point home.  (Spin doctors take note – a politician who endlessly repeats the same election mode mantra loses his/her audience very quickly.) Talented teachers find a range of ways to stimulate learning and interest.  This means devising positive approaches to a given topic, not just relying on tired cliches and mission statements.  Use questions to find out how they are responding, and then show empathy for their position. It also means having a well-honed sense of where your audience is coming from, their personality traits, attitudes to their work, etc.

Don’t be rude to those who question. Instead explain with respect.

Encourage questions – these are evidence your colleagues are paying attention.  Of course, you may detect a touch of snark or slow-baiting in a few people’s cross-examination of what you’re doing.  Restrain your desire to snap or bristle.  Explain things respectfully, and avoid the tiring temptation to say “does that make sense?” or “Are you with me?” – just move on and get to the point!  Those listening will gradually see what you’re doing and appreciate how you’re doing it.

Don’t sneer at slowness of uptake. Instead praise movements in the right direction

Those bursting with revolutionary zeal for workplace improvement are liable to be impatient with the “plods”.  You’re not doing yourself or your business any favours if your attitude and threshold requirements for speedy change are set too high.  Make the time to directly engage with everyone and praise movement in the right direction when you see it.

Keep presenting evidence of the improvements made and how they flow through the organisation.  Show who benefits (directly and non-directly), and get them talking to each other as well.  There’s no need for “star of the week/month” stuff – it’s sometimes counter-productive; employees who are already doing what’s expected of them don’t necessarily get a kick out of gold stars or gift vouchers.  Thank people directly and personally for what they’re doing and reward initiative as it happens.

Most importantly be a role model for openness to change and quality. Don’t complain and display frustration and negativity – it is too contagious.