Changing jobs because of annoying workers

We know managers can be so upsetting for some that workers leave and find new jobs. But what about co-workers? Have annoying workers led you to change jobs?

The latest research of 2000 American workers by Olivet Nazarene University claims to have uncovered the truth about annoying workers. Thirty-six percent of people said yes – annoying coworkers have led them to change jobs.

Interpersonal relationships are a major source of tension

The research revealed the number one source of tension is interpersonal relationships. And the industries they suggest are most impacted are entertainment, hospitality and real estate. Digging deeper, it’s fascinating to see what particularly annoys people, because around half find loudness and complaining the most annoying. A third of respondents say gossip and bullying is what annoys them.

What about your co-workers annoys you?

In exploring the regularity of the annoyance I was alarmed to see the high numbers of people at work regularly annoyed by people around them, especially in the fashion/art and retail industries. Look at how they responded to this question.

How annoyed do you get with your coworkers on a regular basis?

Real estate professionals had the most complaints about coworkers, while the public service had the least complaints. I smiled reading that respondents in communication and journalism seem to experience the most gossip at work.

Is it one person annoying you or many?

Everyone in the survey reported getting annoyed at work. Not surprising – it’s normal. But I wonder if some people have a very low threshold to getting annoyed, perhaps a negative frame of mind at work, or underlying stress leads them to be easily annoyed and with more than one person.

Only a fifth of those who are regularly annoyed at work say it is about one person – a staggering 73% are annoyed with two to five people and 2% say more than 10 people regularly annoy them. What a lot of unhappiness!

Are you an annoying person?

The survey found that 71% of people had been confronted by a co-worker about their annoying behaviour, the majority (65%) being men. Half these people were approached directly by the person impacted, thankfully more than going to a manager (22%). Human resources doesn’t seem to be the first port of call (2%) but many take their complaint to a colleague not directly involved (24%). 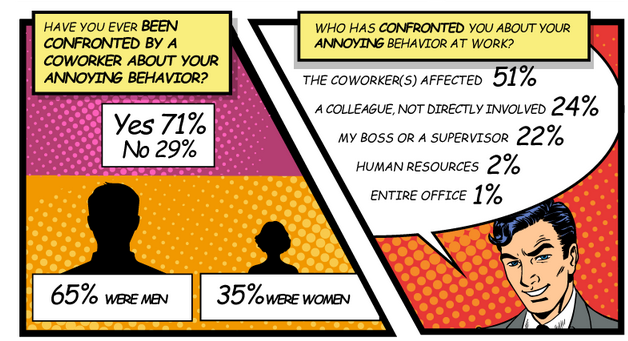 Don’t just complain or walk away, make it better. Before leaving the job because of an annoying coworker ask someone for help – help you to readjust your tolerance level. Let that water flow off the duck’s back! And build your skills to give professional feedback.

Graphics reproduced with thanks to Olivet Nazarene University