Confusion over Anzac Day public holiday: Why next Monday won’t be a day off for most of us 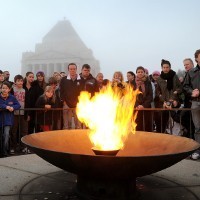 Australia will celebrate the centenary of the Gallipoli landing this Saturday, April 25.

But like other years, there is confusion as to whether businesses can trade on Anzac Day and whether the following Monday is a public holiday.

All Australian states and territories recognise Anzac Day as a public holiday but there are different rules as to which businesses can trade on the day and at what time.

Anzac Day is always celebrated on April 25, regardless of the day of the week it falls on.

This year the only state that will grant workers a replacement day off on Monday, April 27, is Western Australia, although public sector workers employed by the state government and public schools will have the day off in the Australian Capital Territory.

There will be no substitute holiday for employees and employers in the other states and territories.

The situation has prompted the New South Wales branch of the Greens Party to launch an online petition, calling for the NSW government to declare Monday a public holiday because of the “bizarre outcome that working people are given a week day off to celebrate the Queen’s Birthday, but not Anzac Day which many see as the birthplace of a uniquely Australian identity”.

The petition has attracted around 250 signatures but with just days to go until Anzac Day, it is unlikely the government would make a change at this late stage. Nevertheless, the petition from the Greens says “it’s not too late”.

But without Monday being a public holiday in most Australian states and territories, there is still plenty of confusion around the trading hours for Saturday.

Peter Strong, executive director of the Council of Small Business of Australia, told SmartCompany “confusion in the workplace never helps anything – it only breeds conflict”.

Strong believes part of the confusion around public holiday trading in Australia comes from unions, but he says the confusion not only harms businesses, it also harms union members.

“Their members are the ones that suffer,” he says.

Here’s a run-down of the Anzac Day trading rules for each state and territory:

Victorian businesses cannot trade between midnight and 1pm on Anzac Day, unless they fall into the category of “exempt shops”, which includes businesses with 20 or fewer employees or businesses with no more than 100 workers at any one time in the seven days prior to Anzac Day.

After 1pm, all businesses may open provided they are not specifically forbidden from doing so.

However, some shops are free to trade all day, including chemists, petrol stations, cafes, restaurants, takeaway outlets and hire outlets such as video stores.

NSW follows similar rules to Victoria, with most businesses unable to open prior to 1pm. However exempt or small shops can open, including bookshops, chemists, newsagencies, petrol stations and convenience stores. There are also a number of exempt trading areas, based on local government areas.

In Tasmania, businesses are restricted from opening before 12.30pm, with some exemptions. Service stations, pharmacies and newsagents are able to trade, as are businesses that are not part of a shopping centre or mall, where the number of employees having worked there in any day during the previous March did not exceed 10.

Anzac Day is considered a normal day of trade in the ACT, however, many businesses choose to follow the tradition in other states of not trading before 1pm.

Businesses that are exempt from the rules include service stations, restaurants, cafes, real estate auctions and night clubs and hotels where the main business is selling alcohol.

Independent shops must wait until 1pm to trade on Anzac Day, unless they are predominately food and/or grocery stores. However, supermarkets are closed on the Gold Coast, Cairns CBD and Port Douglas.

Anzac Day is considered a normal day of trade in the Northern Territory, although like businesses in the ACT, many opt to remain closed before 1pm as a sign of respect.

General retail shops and businesses in the Perth metropolitan area cannot trade on Anzac Day, with the exemption of small shops.

However, “special retail shops” can trade between 6am and 11.30pm. These include pharmacies, garden nurseries, hardware and home improvement businesses, newsagencies and bookshops, boating shops, shops at sporting venues and shops at international standard hotels.

All general retail shops in the Perth metropolitan area will be free to trade between 8am and 6pm on the Anzac Day replacement public holiday on Monday, April 27.