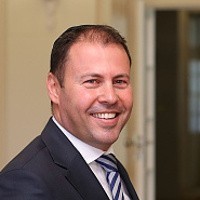 A Brisbane-based financial planner has had his authorised representative status revoked after an abusive outburst on Twitter over the weekend aimed at Assistant Treasurer Josh Frydenberg.

James Howarth is the principal of Retirement Wealth Advisers and until recently was an authorised representative of licensor Libertas Financial Planning.

However, Libertas has revoked Howarth’s authorised representative status following the Twitter comments, which included describing Frydenberg as a “tinkering Jew”.

SmartCompany was one of a number of media outlets to be copied in to Howarth’s tweets on the weekend, with Howarth’s attack appearing to be about the government’s proposed changes to slash commission rates for life insurance policies.

“Slap stick comedy Jew Frydenberg stars in Deregulating Regulator Regulating,” Howarth tweeted to SmartCompany on June 28, along with a link to a video clip of Frydenberg speaking at an event.

Howarth also tweeted directly to Frydenberg, calling him a “c-ck sucker” in one tweet and a “central planning Jew” in another.

“Josh Frydenberg’s attack on free markets will be remembered forever. He is an enemy of free markets and common sense,” Howarth tweeted on Monday.

“It’s inappropriate and unacceptable and does not reflect the culture of our dealer group and appropriate action has been taken,” said Libertas managing director Mark Euvard.

“[Mr Howarth] has been served notice, terminating his [authorised representative status]. He now has to fine a new dealer group.”

@SmartCompany @JoeHockey @JamesRHowarth your anti Semitic comments about @JoshFrydenberg are a disgrace to all Australians.

In a statement provided to SmartCompany this morning, Brad Fox, chief executive of the Association of Financial Advisers, condemned the comments, which he said were “disrespectful, unhelpful and discriminatory”.

“James Howarth is not a member. If he were, this would see him sanctioned and his membership terminated,” Fox said.

“Respect is a core value within the AFA culture.”

Fox said many members of the financial advice community, including the AFA, have concerns about the government’s proposed Life Insurance Framework, which will see both the cost of policies and upfront commission rates significantly reduced, but he said the debate must be rational and respectful.

“Blogs, discussion groups, social media – these all have a role to play, but only to the extent that the discussions are based on facts and appropriate respect,” Fox said.

“We will be providing a number of opportunities for advisers to get the facts. This will lead to a better quality debate about the options going forward.”

SmartCompany contacted James Howarth but did not receive a response prior to publication.

Defamation. I did not lose my licence. I have my lawyers looking at this Eloise. I never had a licence, so the title is clearly defamation.

Hi James. Thanks for alerting us to this. Please contact me directly at [email protected] so we can talk about any possible amendments to the article. Thanks, Eloise

My lawyers will be doing so very soon. Many news outlets globally quote your article.

This article was edited afterwards proving that Eloise is a lying little slut and Smart Company is a terrible source of news.