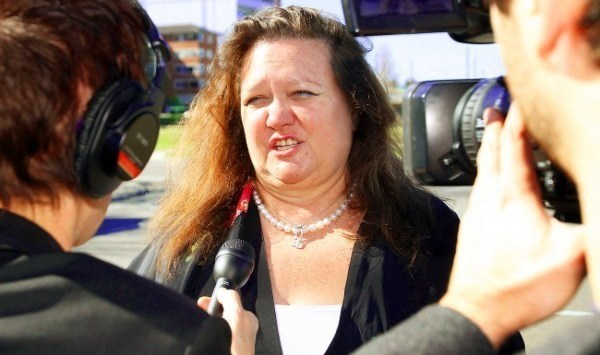 Australia’s richest person Gina Rinehart is being forced to defend claims she stole assets from two of her children and acted in an “abhorrent” manner, in the latest court battle faced by the mining billionaire.

Appearing in the Federal Court on Monday, lawyers for Rinehart’s eldest children, John Hancock and Bianca Rinehart, accused Gina Rinehart of “stealing from her children” and attempting to hide her actions from public scrutiny, Fairfax reports.

Barrister Christopher Withers told the court the case was about a “mother stealing assets from her children” and “fraud of the most serious kind”.

“The conduct alleged is abhorrent. It’s not just a trustee breaching fiduciary duties to the beneficiaries of a trust. It’s a mother defrauding her children,” Withers said.

The allegations relate to claims Rinehart breached her duties as the trustee of a family trust established by her father Lang Hancock. The trust was one of two established by Hancock to grant his grandchildren a 49% stake in Hancock Prospecting, with Rinehart to hold 51%.

Withers said John Hancock and Bianca Rinehart were not aware of the trust that held valuable mining assets, which were later transferred to Hancock Prospecting through a “series of complex manoeuvres”. The action allegedly resulted in Gina Rinehart’s share of Hancock Prospecting increasing from 51% to 76%.

Withers also told the court the children were forced to sign five deeds while they were teenagers or in their early twenties. The deeds allegedly released Rinehart of future challenges to prior misconduct.

However, in a statement issued to SmartCompany this morning, Hancock Prospecting said the accusations “will be disputed”.

“They have been made many times before and both applicants have given binding releases of the claims in question many times,” the company said.

“The allegations do not improve by repetition. They are false and will be strongly defended.”

The claims were made on the first day of what is expected to be a three-day hearing to determine if the allegations made by John Hancock and Bianca Rinehart will be stayed, resolved through private arbitration or heard publicly in the courts.

They follow a ruling by the Supreme Court of New South Wales at the end of May, which granted Bianca Rinehart control of another of the family’s trusts, the Hope Margaret Hancock Trust, which is estimated to be worth between $4 billion and $5 billion.