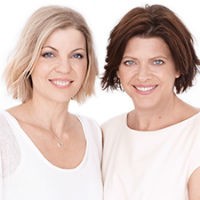 Communication is essential when parting ways with your long-term business partner, according to hardtofind co-founder Erica Stewart.

Stewart’s business partner Trudi Jenkins announced her separation yesterday from the online gift retailer, revealing she will leave the company she co-founded to pursue other interests.

The Smart50 finalists this morning told SmartCompany the break was entirely amicable.

“I think it’s just that Trudi has reached a point where she wanted to pursue other interests. It’s the right decision for her, for me and the business,” Stewart says.

Jenkins confirmed she has resigned and sold her shares in the $10 million company and says she plans to take “a short break”.

“But I’m in conversations with a few different companies,” she says.

The pair had recently beefed up the hardtofind senior management team, which Jenkins says helped her to make the decision to pursue other opportunities.

“Hardtofind is up and running and doing really, really well,” she says.

“It felt like the right time to move on and do something different.”

While Jenkins says she has no plans locked-in, she is excited about taking a new direction by combining her editorial and e-commerce skills.

“I’m just looking for the next opportunity to sink my teeth into,” she says.

Stewart says the “very personal decision” was made by the women together and was helped by strong communication throughout their business partnership.

“I think you just need to keep communicating and really understand what you both want to get out of the situation,” says Stewart.

“We are sad to see her go, but she’ll move on to other things and we’ll always be proud of what we achieved together.”

Psychologist and SmartCompany blogger Eve Ash says the principles of ending a business partnership are the same as ending any relationship, whether personal or professional.

“The important thing is to focus on the facts, not the emotions, so that you gather all the facts of value and get the data together and say, ‘let’s really be clear about what we both want and can’t accept’,” Ash told SmartCompany.

While Ash says any relationship has the potential to turn sour, she believes it is important to focus on the positive aspects of your business and finding an amicable solution to walk away from it.

“When you focus on negatives, it eats away at you. You need to remove all the blaming and defence and focus on moving forward,” she says.

“Maybe the lesson is to look at earlier warning signs and see what can be done before it turns sour. It can be a very amicable transition or phase.”

Ash agrees with Stewart that communication is critical.

“Communication really is key and being really clear with each other, and not expecting the other person to be a mind-reader,” she adds.