How UK company Euroffice took its Office Olympics “too far” 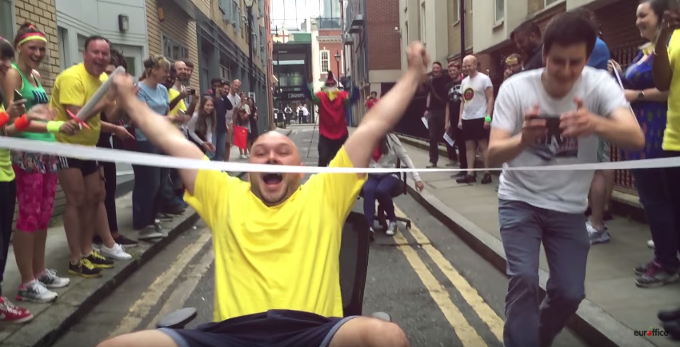 Chair races in the street, long jump in the board room, and a giant parrot were just a small part of what this UK-based office supplies company had for its own ‘Office Olympics.’

Euroffice took it into its own hands to celebrate the opening of the games last Friday with a series of in-office games to get staff in the mood for Rio 2016.

Organised by the company’s social committee, the games kicked off with an opening ceremony, where a mock Olympic torch was lit by mascot Pete the Parrot. This was followed by a long jump competition that involved a rearranged boardroom and an actual sand pit.

After this, an intense street race on office chairs took place, surprising members of the public who were passing by. Fencing, with office rulers and whiteboard markers, was another hit event, with employees wearing masks of famous athletes such as Paula Radcliffe and Mo Farah.

Basketball (involving a wastebin and paper), archery, and of course a closing ceremony rounded out the events.

While no doubt a source of publicity for the business, Euroffice’s managing director said in a statement things went “a bit too far.”

“I knew that my social committee had a tendency to take things a bit too far, but even then I was still surprised to find a long jump pit in my board room and my staff holding chair races in the street outside,” Drakeford said.

Even with all the festivities, the company couldn’t ignore the darker side of the games, with one unlucky employee forced to don a Russian uniform and take a mock drug test.

You can see a trailer for the event below.