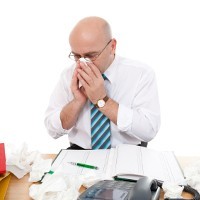 Employee absenteeism is estimated to cost the Australian economy $33 billion in lost productivity, according to this year’s Absence Management Survey from Direct Health Solutions.

The survey of 103 Australian businesses found employees are absent from work for an average of 9.5 days each year, up from 8.9 days in 2013 and the highest level recorded by the annual survey since 2010, when the average annual absence was 9.87 days.

This year’s survey found workers in the travel, tourism and hospitality sectors are more likely to call in sick, taking an average 11.9 days off in sick leave each year, followed by transport and logistics workers, who take an average of 11.6 days off each year.

Direct Health Solutions estimates the daily cost to businesses of an absent employee is at least $340, based on Australian Bureau of Statistics data which puts the average daily wage for a full-time employee at $303.20. The company estimates 92 million working days are lost in Australia per annum, meaning the cost to the economy is approximately $33 billion per annum.

The most common reasons for employees to ask for time off are illness, including colds and flus, headaches and gastro, and home and family responsibilities.

However, 39% of businesses surveyed said absences related to stress, anxiety or depression had increased during the past 12 months, while 21% said they had increased their annual spending on health and wellbeing initiatives to help support their employees.

Paul Dundon, chief executive of Direct Health Solutions, told SmartCompany the increase in the absenteeism is being driven by poor monitoring and management systems within businesses.

“Businesses large and small are struggling to put the right management practices in place,” says Dundon, who says nearly half of the respondents to this year’s survey had under-reported absence levels in their organisations.

“And when people do take time off, [the businesses] are inconsistent in how they manage it.”

Dundon says employee absenteeism appears to spike in the winter months, with workers less likely to call in sick during summer.

But despite the gloomy numbers, the survey also found there are three things businesses can do to improve the level of absenteeism in their workplace, starting with centralising the collection of data about employee absences.

Dundon says the second step is to conduct return-to-work interviews with all staff members who have taken time off, even if it is only for one or two days.

“It sends a strong message to staff that employee absenteeism is being managed,” he says.

This leads to the third step, which is to implement “trigger management”, or a system for managing staff who begin displaying a pattern of calling in sick.

“The organisations that showed the greatest improvement were the ones that are using these three strategies,” says Dundon.

While Dundon acknowledges it can often be harder for small businesses to manage employee absenteeism given the larger impact the absence of one worker will have on the company, he says the most important thing is not to avoid talking about it.

“There is often fear of losing the employee so [small business owners] avoid talking about it,” he says.

“Most people who ask for time off have genuine reasons but you need to have the conversation to find out why,” he says.