US student attempts to Snapchat his way to a job: Why you shouldn’t be put off by a creative CV 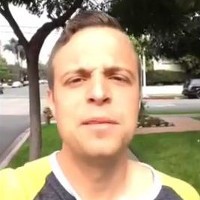 A Californian job seeker is receiving global attention for his creative application for a job with social media giant Snapchat.

While most job seekers opt for written resumes that spell out their achievements, MBA student Elski Felson says he hates “paper resumes”.

So when he saw a job advertised with Snapchat, he decided to apply using a series of “snaps” from the app itself.

“I don’t think a piece of paper can encapsulate anybody so I decided to make you my story,” Felson said in the YouTube clip of his application.

“I broke it down line for line of exactly what you’re looking for in a person, remember these are your words.”

Felson created a “snap” for each of Snapchat’s key selection criteria – with some more serious than others.

For “multi-tasking rockstar”, Felson spun a basketball on his finger while riding a bike on the beach and taking a selfie. “Is this rockstar level?” he asked.

To demonstrate his “phenomenal presentation skills”, Felson arranged different coloured packets of candy on a plate, while choosing to watch television show Breaking Bad apparently showed both his ability to solve problems with peers and individually.

He googled “why is my poop green” to show his research experience and even took his own “ugly selfie” to meet that criteria.

“I’m telling ya, I’m the man for the job,” said Felson at the end of his application, saying Snapchat is his favourite app, before encouraging the company to contact him via social media – and his fans to subscribe to his YouTube channel.

While Snapchat has not confirmed whether Felson is being considered for a job, the social media platform does list being “passionate about the product” as a quality it looks for in its ideal candidates.

Sue-Ellen Watts, managing director of wattsnext HR, told SmartCompany creative resumes and job applications like Felson’s have the potential to save SMEs time, as well as improve their recruitment processes.

“I’d like to see the death of the resume, to be honest,” Watts says.

“For a small business, receiving loads and loads of resumes is really time consuming and you don’t actually get a lot of information.”

Watts says job applications that use technology in a creative way can also help recruiters determine if an applicant will fit in with the culture of the company.

“Culture is really important for any company, but particularly in small business, where one person not fitting in with the culture can have a huge impact,” she says.

Watts says it’s important for recruiters watching videos like Felson’s not to discriminate in any way, but says there is really no more risk of discrimination with a video than there is with a written resume.

“People make judgements about where people went to university or where they worked, all those sorts of things,” she says.

“Small businesses should definitely be open to moving in this direction,” says Watts, who recommends business owners even consider asking job applicants to apply with videos.

“When we recruit internally we want people who really want to work for us, who’ve thought about who we are and why they want the job, this is a good way of showing that.”

SmartCompany contacted Snapchat but did not receive a response prior to publication.

Not inclined to agree with videos. This wont be for everyone, especially older applicants.

And what makes you think a video will encapsulate. His video Looks unprofessional, he could be acting just to get in the doors…..ridiculous, nothing like a phone call and a meeting.