“I had many sleepless nights”: The KK gift of chocolate reindeer poo that ruined this public servant’s career 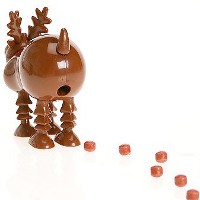 Forget about Christmas party etiquette, employers now need to think about how tacky Kris Kringle presents can upset staff, according to one former public servant.

Ngoc Luan Ho Trieu has told The Canberra Times a distasteful KK gift ruined his career, forcing him to quit his job as an economic modeller for the Finance Department.

The gift in question – a plastic reindeer that dispensed chocolate ‘droppings’ when you pressed its tail – was given to Ngoc by an anonymous colleague in December 2012.

He also received some play dough with the handwritten words “Luan’s modelling kit”.

“I was shocked and very upset,” Ngoc told Fairfax.

“That really spoiled the joy of the division’s Christmas lunch so I quit halfway through it [the work Christmas lunch]. I had many sleepless nights after that, and always felt heartbroken when going to work the following days.”

Ngoc endeavoured to find out who the unidentified gift-giver was, only to be told it had likely come from one of his superiors.

After taking time off for Christmas, he said he was unable to get over the incident and felt offended his colleagues had “such low regard” for his profession as an economic modeller. He said he put his hand up for redundancy “with a heavy heart” in July 2013.

Ngoc is now warning office workers about the dangers of Secret Santa presents, telling Fairfax “harmless pranks” can have long-lasting effects on colleagues’ feelings and even their careers.

“Now, 2014 Christmas is coming and … I still cannot escape from the sad feelings that Secret Santa forced on me two years ago,” Ngoc said.

HR Anywhere managing director Martin Nally says some employees can be extremely sensitive, but he hopes workplaces would not attempt to regulate the humour of light-hearted activities such as Secret Santa.

“My hope at Christmas would be that employers don’t ever stamp out humour,” Nally says.

“But also never truly go out of their way to offend.”

While Nally says employers should take any complaints of workplace conflict seriously, it is important to consider the intention of a workplace joke, believing in this case, “the intent wasn’t to offend, it was to amuse”.

Nally says while such issues as cultural sensitivity are a no-go zone for workplace jokes, employers cannot be expected to regulate what each person finds amusing,

“Toilet humour has been around and will be around forever. Fart jokes and toilet humour are OK as long as it’s pretty lame. How can you try to regulate what tickles each person’s fancy?” he says.

Poor darling – what a tragic turn of events. The crosses some people have to bear. Now, about that Kris Kringle present I was planning – sudden change of plan…

Helma says that Australia’s ID depends on plastic reindeer (reindeer,so Aussie) that drop out chocolate poo? Clearly an imported product. Can’t we do better than that?

Crystal Ball……
The world of the future……
There will be no interaction between the human population because there will be no point.
No humour, no laughter. The safest way to exist is to just keep quiet because whatever one says irrespective of the intentions could be interpreted as bullying or sexual harassment.
I see in America has laid a complaint against Trump because he ogled her……..
REALLY??????
I’m about to get chucked out of weight watchers because I ogled a desert menu and started to drool. No harm done in either case.