The Fair Work Commission has decided to cut Sunday and public holiday penalty rates in the retail, fast food, hospitality and pharmacy sectors, however Sunday wages will not drop to the same level as Saturday rates.

After months of deliberation and several delays, the Commission handed down its ruling on whether Sunday pay rates should be brought in line with Saturdays this morning.

The changes to Sunday rates in workplace awards in each of the sectors are:

Hospitality: In the hospitality award, the loading for full and part time workers will be reduced from 175% to 150%, while there will be no change for casuals.

Pharmacy: There will be changes to pay rates for pharmacy staff working between 7:00am and 9:00pm, while those working before 7:00am and between 9:00pm and midnight will continue to get the existing loading. 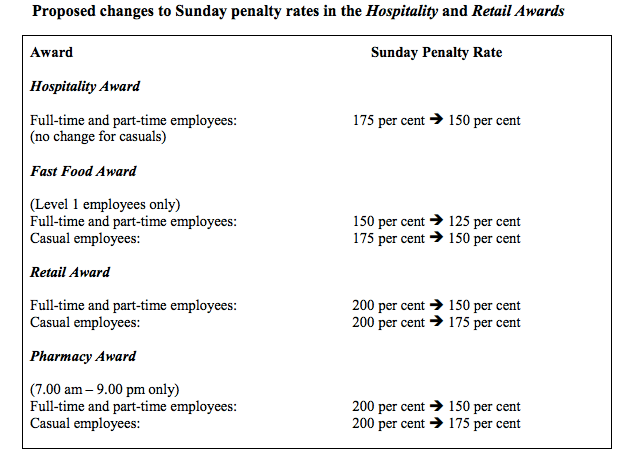 In a live broadcast, Fair Work Commission President Iain Ross thanked stakeholders for their input in the decision making process, highlighting that the final written submission on the decision was submitted on February 4.

Saturday penalty rates were also reviewed by the Commission but a decision was made not to alter these rates. In outlining the decision Ross said the Commission understands that while working Sundays might not have the “disutility” that it once did for workers, Sunday work still did have an impact and this formed part of the Commission’s decision not to pull Sunday rates completely in line with Saturdays in the retail and hospitality sectors.

“Except in fast food awards, we have not reduced the Sunday rates to the same rate as Saturday,” Ross said.

“Sunday work has a higher level of disutility, but much less than in times past.”

Ross said that submissions on this issue suggested the stakeholders “accepted the proposition” that Sunday work had some impact.

“The conclusions we have reached are largely based on the particular circumstances related to these awards,” Ross said of the decision.

“Given these characteristics, the decisions we have made provide no warrant for the variation of penalties in other modern awards.”

The Commission said it is yet to come to a view on the most appropriate transition arrangement for the changes, but says its provisional view is that the new Sunday rates should start to be rolled out from July 1, 2017.

The Commission has also decided to alter public holiday penalty rates in the hospitality and retail awards, which will come into effect on July 1, 2017.

These changes include cutting public holiday rates for full and part time hospitality and retail workers from a 250% loading to 225%.

Casual hospitality workers will get a 250% loading on public holidays instead of the current 275%, while retail workers than currently receive a 275% public holiday loading will also be brought down to 250%. 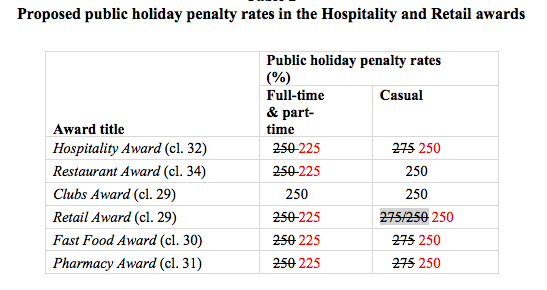 The business community has been holding its breath

The Fair Work Commission has been looking at Sunday penalty rates since 2015, when the Productivity Commission’s review of Australia’s workplace relations system recommended Sunday rates be reviewed because they were “inconsistent” and “anachronistic in the context of changing consumer preferences”.

Penalty rates “frustrate the job aspirations of the unemployed and those who are only available for work on Sunday. Rates should be aligned with those on Saturday, creating a weekend rate for each of the relevant industries,” the Productivity Commission reported in November 2015.

The business community expected a ruling from Fair Work by October 2016, and a number of delays in the ruling have frustrated smaller operators.

Businesses have previously told SmartCompany about the need for certainty on penalty rates across the board, citing the stresses caused in particular by state based public holidays like that on the AFL Grand Final Eve in Victoria.

Some say they are now given no choice other than to operate on a model that assumes customers want access to services 24/7, which has increased their overall wage costs.

“Customers like consistency, so we’re open all holidays except Christmas Day.” one business owner told SmartCompany in 2016.

Business groups have used the past six months to argue their position that working on a Sunday does not put more of a burden on workers than any other day of the week.

“A large proportion of the employees in the fast food industry are young people with study commitments, and they are not available to work during normal business hours,” Stephen Smith, head of workplace relations policy for the Ai Group told SmartCompany last year.

“Many employees in the industry prefer to work on weekends, including Sundays.”

Meanwhile, a number of other options were floating in discussions about changes to penalty rates, including the option to introduce a flat loaded hourly rate instead of penalties.

Council of Small Business Australia chief executive Peter Strong previously told SmartCompany that this solution could have merit for businesses in which staff work across a variety of time periods and have changing rates of pay because of this.

However, others have spoken about taking the Fair Work Commission’s decision with caution, saying that it may discourage good staff from working weekends.

“We have a real problem encouraging people to work, and this doesn’t help – it doesn’t encourage an incentive to work,” Alan McDonald, managing director of law firm McDonald Murholme, told SmartCompany last year.

Unions and workers have rallied out the front of the Fair Work Commission’s offices this morning, with some saying they would refuse to work without the incentive of additional loadings on a Sunday.

Union rally about to get underway outside the #BNE office of Fair Work Commission over pending w’end penalty rates decision @abcbrisbane pic.twitter.com/60LMSWX0or

“If they cut penalty rates I will be SO angry,” said one worker on Twitter. “I work every Sunday night until 10pm when everyone else is at home with their families.”

Penalty rates were there for a reason, as are Public Holidays. Hitting some of the lowest paid workers with cuts to them when they work undesirable hours is unfair to workers.
However, what is totally unfair to businesses is rubbish holidays cited including “Grand Final Eve”. Totally unnecessary, no historical significance, a total cash grab by the Unions backing Daniel Andrews which has cost businesses in Victoria millions which has now negatively impacted on the entire country as random Public Holidays would have to be one of the reasons cited wage costs are high to employers. The Kennett Government killed Show Day because it was pretty nonsensical by the 1990s. Rather than attacking penalty rates, attack unnecessary Public Holidays’ like Daniel’s frolic.

You mention in your article and I quote: “Hitting some of the lowest paid workers with cuts to them when they work undesirable hours is unfair to workers..”
And therein lies the problem … the definition of undesirable hours.
Depending on age I suppose and the so called right to have a job, I reckon most hours to have to work are undesirable.
This is more about Unions looking for a reason to justify their existence. Of course we have to always considers workers rights. Wonder what would happen if there was no such things as Penalty Rates and the minimum wage was just increased. Those on penalty rates would certainly get a reduction but the majority would get an increase.

I think this report flies in the face of intelligence and pragmatism.
So we now have a whole lot of people that are going to be half pregnant if you get my drift.
They’ll be working and getting what might be in the eyes of some a gratuitous payment because the issue still hasn’t been addressed as to whether in these times and days this preference system is just outdated.
We have to be fair to workers and workers have to realise that a job is a privilege not a right.and owners also have to realise that a job is neither a privelege nor a right but an essential component of life, an entitlement provided certain benchmarks are met.
We can prove when employers flaunt the system because there is a paper trail and legislation demanding what employers do, but there is no trail for workers who turn up most probably reluctantly and in many cases go through the motions of being there and watching the clock always being defended by Fair Work, Unfair Dismissal, Bullying and in a lot cases other invented neuroses that might receive a payment.
I’m nearly sure all employers would not vote in favour of penalty rates but might be amenable to paying staff extra for hours but this is as a gratuity and might find it’s own level and vice versa.
I wonder if certain workers are cherry picking, by that I mean selectively looking for out of hours work because the date and times determine the payment.

Another costly commission that took miles too long and came up with a determination that is couched in hope and that is to keep both sections of the divide happy.
There’s no time for happy, only time for common sense..

What a load of shit! Decided by people, whos working life consist of their butt facing south on a chair… These so called “experts” are your typical drips under pressure.
Now my small shitty pay will be even smaller
Living the Aussie dream!

There are many small businesses that struggle to pay the penalty rates and also would not hire people because of it but you have to remember that the cost of running a
business is very high in Australia and it’s not just because of wages but the cost of energy “electricity, gas, water” red-green tape, taxes and fees. If the cost to businesses were lower then they keep more of their profits and are in a position to keep existing staff and hire more people.

Useless. Paying a casual more for a days work that they would take anyway for less pay (as it’s generally their only free days off school / Uni / kids) is just ridiculous. Well done FMC for once again having no clue what small businesses go through to make a living (generally earning less per hour on a Sunday than 18 year old Johnny Casual).