A crash course for News’ Robert Thomson: How to be a public company CEO 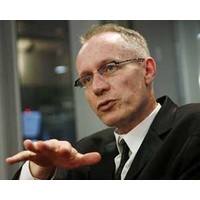 Since Rupert Murdoch announced last June that he was splitting his News Corp empire into two separate companies, there’s been plenty of speculation about which Murdoch loyalists will lead each part.

Late last night, we found out what Murdoch had in mind. He’ll be leading the fast-growing entertainment business, to be named Fox Group, himself. The ailing publishing business, which will retain the News Corp name, is to be headed by the current managing editor of the Wall Street Journal, Australian journalist Robert Thomson.

For long-time Murdoch watchers the decision to elevate Thomson, who is said to get along splendidly with old Rupert, is unsurprising, but it marks a radical departure from the practices of most large companies. Thomson has never been a CEO, or even an executive. His previous roles, which include deputy editor of Financial Times and editor of The Times of London, can all be characterised as product-focused. Now CEO of one of the world’s largest and most challenging companies, he’ll have a steep learning curve ahead of him.

Here are six things Thomson will have to get on top of, stat.

Leaving the operations behind

The biggest difference between an operations role and the CEO position is one of separation. CEOs cannot directly oversee all the work that goes on in the divisions they’re responsible for. If they do, they could be seen as undercutting their senior executive and middle-management, and micromanaging when they have more pressing concerns. In Thomson’s case, he’s got to figure out what to do about the financially struggling New York Post, and he’ll have to decide on whether to go on an acquisition spree as US newspapers such as The Los Angeles Times and the Chicago Tribune come onto the market.

Moving from operations to strategy is a big shift. Thomson will have to adjust if the business isn’t going to suffer, and if he doesn’t want to drive his underlings insane.

Dealing with the board

This is the one requirement of being a public sector CEO we’re sure Thomson already has down. Murdoch will chair the company Thomson is to head, and the relationship between the two is already strong. Trivially, Thomson and Murdoch share a birthday. They were born on March 11, 30 years apart. More substantially, the two are described as sharing “a complete mind-meld”, according to a recent New Yorker profile.

The pair, both Australians, holiday together, and their families are close. Thomson was the only News Corp employee to attend the baptism of Murdoch’s children, and Murdoch is godfather to Thomson’s two sons. We don’t think Thomson should have any trouble dealing with his board.

If Thomson joins the New Corp board, as is common practice with CEOs, he’ll be liable for a slew of corporate governance regulations across a range of jurisdictions. In Australia alone, the Australian Institute of Company Directors estimates there are 700 pieces of legislation affecting company directors. Some of them place the onus of proof of innocence on the directors as opposed to the prosecuting authorities, which means Thomson will have a whole lot of new concerns to deal with.

On another corporate governance issue, CEOs need to stand up to the board from time to time, or at least to make their case. It’ll take some finesse if Thomson should ever see the need to disagree with Murdoch.

A CEO is a company’s public face. While his journalism background will stand him in good stead making sense of the news cycle, it’s still difficult to go from asking the questions to being asked them.

It’s not just journalists who’ll be scrutinising Thomson. Institutional investors in closed-door meetings, retail investors in annual general meetings, conference calls and roadshows with analysts – there’ll be a lot of people to sell to.

Editor roles are backroom positions in the day to day, even at a powerful institution such as the Wall Street Journal. Thomson is stepping into another world.

Managing a business across borders

News Corp has major publishing assets in Australia, the United Kingdom, Canada, India, and New Zealand. These jurisdictions face similar but not identical challenges, and Thomson will have to get on top of all of them.

This plays to the “vision” thing. Thomson will have to project leadership and vision to thousands of people he’s unlikely to work with closely. He must persuade, not just decide. It won’t be easy.