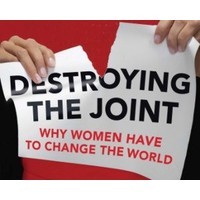 Women are reaching that critical 30% threshold of representation in politics and media?—?which is terrifying for the likes of Alan Jones, writes ethicist, researcher, writer and commentator Leslie Cannold in the book Destroying the Joint: Why Women Have to Change the World.

“She [the Prime Minister] said that we know societies only reach their full potential if women are politically participating. Women are destroying the joint?—?Christine Nixon in Melbourne, Clover Moore here. Honestly … There isn’t a chaff bag big enough for them.”

“Got time on my hands tonight so thought I’d spend it coming up with new ways of ‘destroying the joint’ being a woman & all. Ideas welcome.”

No ruler secure in his citadel takes pot shots at the peasants. Shock jock Alan Jones’ decision to use the bully-pulpit of his popular 2GB talkback show to attack Australia’s first female Prime Minister, first female police chief, first popularly elected female mayor of Sydney and one of the central contentions of contemporary feminism itself suggests that on the gender relations front, he wasn’t feeling relaxed and comfortable at all.

The source of his discomfort is 30%.

Feminist aspirations for women to participate equally in society were for 50%. They believed a fair and equitable society would offer opportunities to all its citizens regardless of gender and, because women were just as capable as men, equal opportunities would result in equal participation.

We’re not there yet. While Australian women’s educational attainment is among the best in the world, the 2011 Global Gender Gap Report from the World Economic Forum shows that we fell six points to 18th for economic participation and six points to 38th for political empowerment.

Among the many things we’ve learned from women’s slow progress is that there are critical waypoints along the road to equality. One of these waypoints is 30%. That is the point of critical minority and therefore critical change. When 30% of any workforce or team is female, women become visible: they are seen by their own daughters and girls in general as an example of what’s possible; they can influence how a work environment operates rather than needing to act like a bloke to fit in; they can sponsor other women into positions of influence and by so doing bring about lasting change.

None of this is to say that 30% represents equal participation for women. It does not. Nor is it to say that women must settle for 30% because in a world still run by men, this is the best they can realistically hope for. Rather, it is to suggest that 30% can serve as an effective staging post from which equality-minded citizens can consolidate and gather forces for the final assault on the male citadel and a true and total sharing of power.

There are ample studies to show the ways in which 30% constitutes a critical mass but for me the proof of the pudding has always been in the way the most terrible s-xists start squawking whenever the 30% mark in their field of endeavour is approached or reached. I’m not saying they’re doing the numbers, but rather that it’s an intuitive thing. To s-xist males, 30% is the point at which they start to feel uncomfortable because when they look around, the joint is no longer being solely run by and for them.

I’m a writer, so I first noticed it here. When male writers start claiming?—?as did Gerard Windsor in 1986?—?that “women writers get favoured status treatment … the worst position for a writer to be in is that of being a middle-aged, Anglo-Celtic male”, I did some counting and discovered that women were by no means dominating among published authors but from humble beginnings had crept past the 30% mark.

While I hesitate to call Jones a journalist, he does operate in the media world and the media is largely focused on happenings in the world of politics. A 2012 paper on female representation in Australian parliaments found 30% of all parliamentarians in Australia are female. This figure breaks down to reveal that 31% of Australia’s federal politicians of female and 25% of those in the NSW Parliament are women. A 2009 paper found that 23% Australian police?—?but only 8% of senior commissioned officers?—?are women.

Moving on to the media world, Chrys Stevenson demonstrated in a 2012 The King’s Tribune article on gender equity in Australia’s fourth estate, women are at the 30% mark in most of the counts that matter. Percentage of female front-page bylines?—?30%; percentage of stories about women or in which the main talent is female?—?30%. Subjects of, or female talent for, the story?—?30%. Percentage of women featured in front-page photos and cartoons?—?including Melbourne Cup hat and other glam shots?—?36%.

To Jones, the sudden visibility of women rubbing shoulders with the powerful, expecting?—?perhaps even feeling entitled to?—?the same opportunities for advancement as he has always enjoyed is the sight of the barbarians at the gate. When men like him and Windsor gripe about being overrun by women, they are not making precise numerical claims about female dominance in their field of endeavour. Rather they are calling upon the language of fairness and justice to express their view that however much women have in a numerical sense, they have too much in a moral one. More?—?to be precise?—?than men like Jones feel they deserve.

To the feminist barbarians who clashed with Jones over the “destroy the joint” comments, everything about what Jones said and what he represents rankled. The 30% aspiration for female participation distressed because everyone knows that true equality requires women to get half, while the struggle women face to achieve this reduced goal was plain depressing. Add to this Jones’ threat of violence against the few women who have managed to fight their way past the old guard and get their just desserts?—?by a man who serves as a towering example of all that is wrong with the way the joint had been run to date, no less?—?and the ingredients were there for a riot. Or a revolution.

*This is an edited excerpt from Destroying the Joint: Why Women Have to Change the World, edited by Jane Caro (UQP), published April 24.