A lesson for Asia in progressive education 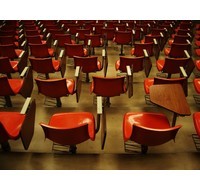 Education at all levels in relation to Asia should be at the centre of policy-making this century.

Whether at the primary, secondary or tertiary level, Australia will increasingly compete with its Asian neighbours in the education sphere. Our strong history of progressive teaching and learning will set us in good stead to take on this challenge, but there is still much to do at home.

At the tertiary level, universities will compete for research outputs and the production of knowledge for both economic and social benefit.

As a wealthy country, Australia has established 41 universities, all of which are expected to pursue knowledge without fear or favour for all students.

In 1990, American education scholar Ernest Boyer suggested four defining characteristics of universities. These were discovery (research), integration (interdisciplinary studies), application and teaching. As a broad framework, these ideas need to continue to identify university life in a democratic and equitable society.

Precisely because of the nature of universities and the impact of globalisation, some universities in Australia and Asia will be in a competitive relationship for research that provides economic benefit.

This involves access to competitive grants, application of knowledge and research papers. With the proviso that all Australian universities should offer high quality teaching and research programs, international research rankings are a reasonable priority.

At the primary and secondary levels, schools will be compared through international testing.

Australian schools perform well on national and international mass testing regimes, although there is continuing debate regarding the meaning of such results. It is to be expected that Australia does well given the levels of funding allocated, the strength of the teaching profession and the approaches adopted towards teaching and learning.

But simplistic comparisons through mass test results of schools in Australia and Asia should be avoided. Schooling and learning are complex mixes of political, economic and cultural factors that influence the school, home and child. Mass testing is a prime example of the efficiency and effectiveness ideology of neo-liberalism applied to education, and is totally inappropriate.

We need look no further than the shameful state of Aboriginal and Torres Strait Islander education and the need for more support for children with disabilities for evidence of deficiencies in the system not reflected in test results.

We also need to rethink the middle years of schooling, including the approach towards mathematics. Without such improvements, mass testing can give a very distorted picture of student learning.

Australia can adopt a leading position in the region through approaches to teaching and learning at all levels that focus on processes of inquiry and critique. Democratic inquiry in education involves participation, inclusiveness, links with community and culture, human rights and the encouragement of progressive citizenship.

Approaches to education that emphasise narrow reproduction rather than creative production of knowledge ultimately fail the state and the citizenry.

Australia has a laudable history of progressive education that can push back the boundaries and constrictions of orthodoxy, conservatism and neo-liberalism throughout the region.