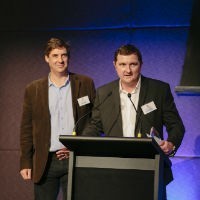 Australia’s best startups were recognised in Melbourne last night at the fifth annual StartupSmart Awards, with one of SmartCompany’s top online retailers taking out the top honour.

Temple & Webster was founded in 2011 by Brian Shanahan, Adam McWhinney, Conrad Yiu and Mark Coulter and has since become a household name in homewares retail. The award judges praised the retailer for its strong customer acquisition and ability to scale.

The awards were presented by SmartCompany’s sister publication StartupSmart following a presentation from guest speaker and Vinomofo co-founder Andre Eikmeier and a panel discussion with representatives from a number of Australia’s leading venture capital funds.

Other winners on the night included Living Room of Satoshi, which was named Best New Startup, SafetyCulture, which received the award for Best Regional Startup, and LadFriend, which took out the Fastest Growing Startup category.

Entrepreneur Jessica May was named Startup Hero for Enabled Employment, a platform that connects employers with job-seekers with disabilities, while shopping network Cuzin received the Best Startup Idea award.

To find out the state-based award winners and to learn more about each of the winning businesses, visit the StartUpSmart Awards announcement page.