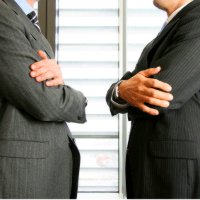 People’s respect is hard to gain, and very easy to lose.

What’s the easiest way to lose it? And for those new to leadership, how they can avoid self-destructing?

For nearly the past two years, LeadingCompany has been asking Australia’s leading corporate chiefs that very question.

After dozens of interviews, some common themes come out.

MYOB chief Tim Reed has led some companies that have done fantastically. But, when he was young and in Silicon Valley, he led a start-up that failed.

The experience taught him plenty about dealing with failure. One of the key lessons, he says, is that leaders should never pass the blame.

“Part of being a leader is being responsible for things. As soon as a leader abdicates responsibility, blames external circumstances, looks to pass the buck, they’re extremely diminished in being able to lead in the future.”

Cochlear chief Chris Roberts expressed a similar sentiment. He said it was a leader’s job to plan for the future, and never think they can leave things up to chance.

“A leader should avoid believing in hope,” he said. “It’s not a strategy.”

Several of the business chiefs we spoke to said leaders shouldn’t ever set limits on people’s creativity.

It was a sentiment echoed by Adrian McFedries, who leads Jetts Fitness, one of Australia’s fastest-growing franchises. “Just don’t use the word ‘don’t’,” he said. “It really discourages your team from thinking.”

Invocare chief Andrew Smith says you should never assume you have all the answers, and never tell people ‘you’re wrong’ as a way to end a discussion. “A good leader is a good listener,” he said.