The power of authenticity: Four leadership lessons from Jacinda Ardern

The qualities that have made Jacinda Ardern New Zealand’s most popular prime minister in a century were on display last week as she took an earthquake in her stride during a live television interview.

“We’re fine,” she declared cheerfully as the 5.9-magnitude quake shook New Zealand’s Parliament House in Wellington for 15 seconds. “I’m not under any hanging lights.”

Her coolness under pressure, self-discipline and the decisiveness of her government’s response to the COVID-19 pandemic have led some to call Ardern the most effective national leader in the world.

But the key ingredient to her popularity and effectiveness is her authenticity.

In the words of Helen Clark, New Zealand’s prime minister from 1999 to 2008, Ardern is a natural and empathetic communicator who doesn’t preach at people, but instead signals that she’s “standing with them”.

“They may even think: ‘Well, I don’t quite understand why the government did that, but I know she’s got our back.’ There’s a high level of trust and confidence in her because of that empathy.”

These insights are confirmed by my own research into authentic leadership.

How we respond to authentic leaders

As a lecturer in business leadership, I’m particularly interested in the value of authenticity in the workplace. Part of my research (with colleagues Steven Grover and Stephen Teo) has involved surveying more than 800 workers across Australia to find out how the behaviour of their leaders shapes their feelings about work.

For better or worse, leaders often represent the entire organisation to their employees. How we feel about our boss transfers into how we see the company as a whole, just as political leaders represent the nation.

The results from that survey were decisive. Employees were, on average, 40% more likely to want to come to work when they saw their line manager as an authentic leader, and those who came to work because they wanted to were 61% more engaged and 60% more satisfied with their jobs.

At a time when careers routinely span multiple organisations and the nature of work becomes more transient, these results demonstrate the value of positive personal connections in the workplace.

Our research also sheds light on four qualities we value in authentic leaders.

Authentic leadership doesn’t just mean ‘being true to yourself’.

This notion has led some to describe the likes of Donald Trump as authentic. 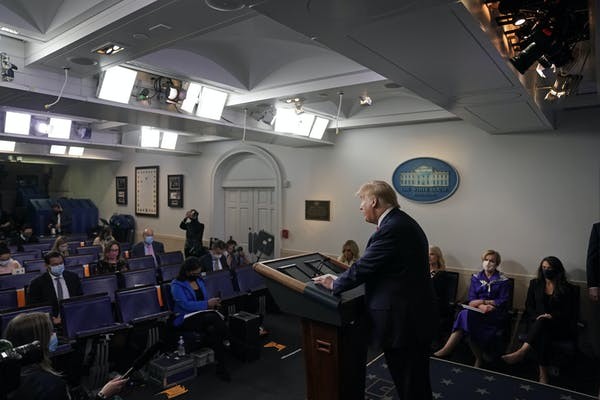 Donald Trump speaks during a news conference at the White House on May 22, 2020.

But authentic leaders are not simply callous, self-serving individuals with no social filter. According to Claudia Peus and her co-authors of a seminal 2012 article on authentic leadership: “Authentic leaders are guided by sound moral convictions and act in concordance with their deeply held values, even under pressure. They are keenly aware of their views, strengths, and weaknesses, and strive to understand how their leadership impacts others.”

Authentic leaders manifest the Ancient Greek maxim to ‘know thyself’. They know what truly matters to them, and their own strengths and weaknesses.

Our values are often hidden assumptions; revealing them requires an active and honest process of personal reflection.

Before we can lead others, we must first lead ourselves.

Authentic leaders have the courage to stand up and act on their values, rather than bending to social norms. Doing what you feel is right is rarely easy, especially when lives are on the line, but that’s when it matters the most.

An example comes from the last time businesses around the world were struggling this badly, the 2008 global financial crisis. When the board of US-based manufacturing company Barry-Wehmiller wanted to discuss layoffs, chief executive Bob Chapman refused.

Instead, Chapman asked everyone to take four weeks’ unpaid leave, saying: “It’s better that we should all suffer a little than any of us should have to suffer a lot.” The company has since gone from strength to strength under his ‘truly human leadership’.

3. They appreciate their own biases

Authentic leaders are aware of their own biases and strive to see things from multiple viewpoints. We cannot know all sides to an issue and must work to understand and respect others’ perspectives before forming opinions or making decisions.

Acting in the best interests of the collective requires a lucid and compassionate understanding of how our actions affect other people.

4. They are open and honest

Authentic leaders cultivate open and honest relationships through active self-disclosure. Dropping one’s guard and letting people in isn’t always easy, especially in the workplace. Yet only when we allow ourselves to be vulnerable in front of another person can they open up to us in return.

Australian Prime Minister Scott Morrison appears to have learnt this lesson since the beginning of the year, when his response to Australia’s catastrophic bushfire season led to unfavourable comparisons with Ardern.

After the Morrison government revealed a $60 billion budgeting error over its COVID-19 JobKeeper package, he swallowed his pride and accepted fault, acknowledging that “responsibility for the problem ultimately rested with him”.

It’s a stark contrast to Trump’s refusal to admit any mistake in his handling of the US response.

Authenticity has the power to unite

Support for an authentic leadership approach isn’t unanimous. A notable critic, professor Jeffrey Pfeffer, has stated that: “Leaders don’t need to be true to themselves; in fact, being authentic is the opposite of what they should do.”

But our research reveals the power of authenticity to unite people behind a collective cause. Relationships built on mutual trust and shared values are the key.

Jacinda Ardern’s unprecedented popularity mirrors these results. When we see authentic leadership, we know instinctively that we prefer it.

NOW READ: What this Aussie VC learnt from lunch with Jacinda Ardern