The average Australian chief executive earns $4.75 million each year, but are they worth it?

Did you know October 16 was Boss Appreciation Day?  Neither did I.

Is it a date to add to your calendar? Maybe not.

Even in the US where it’s a recognised day, a qualitative survey by Olivet Nazarene University found while the majority of respondents have their boss’ number on speed dial, they don’t follow them on social media and, if asked, probably wouldn’t hang out with them after office hours. 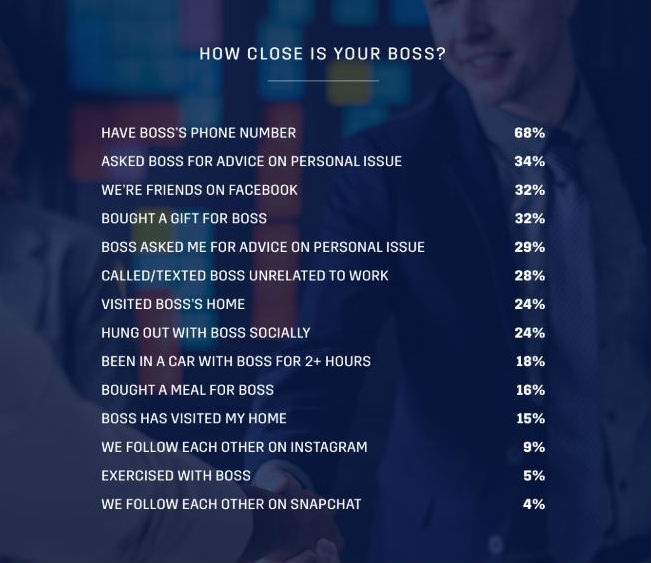 This isn’t terribly surprising. Most of us tend to want to keep a healthy distance from becoming mates with management. Bosses, in turn, tend to feel much the same.

Staff perceived to be heartily currying favour with management are not well-regarded. They are seen as ambitious (in the wrong way) and servile. Whichever way it goes, open favouritism is a recipe for trouble.

How close are you and your boss?

Unsurprisingly, about one-third of respondents have asked their boss for advice on a personal issue. Interestingly though, almost as many bosses have asked for advice from staff on personal issues. A total 28% reported texting their boss about non-work issues. Both instances of communication likely lead to appreciation and friendship.

The survey also explored whether respondents had met their boss’ significant other or kids, and vice versa.

I was especially interested to learn of people who are ‘very happy’ at work, 74% have met their boss’ significant other. I was also fascinated by the fact the industries with the most family interaction are law, not-for-profit social services and real estate. 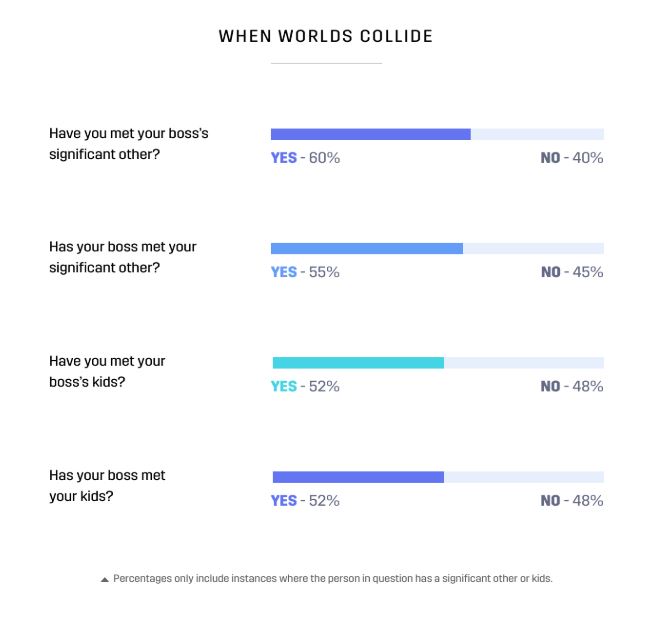 Granted, bosses bring a wealth of experience and advanced skill sets to their roles. So is this something worthy of improved appreciation? And should we ignore some glaring disparities?

There’s debate about whether this approach to executive remuneration and bonuses is based on a defunct model more appropriate to the ‘greed is good’ mentality of the 80s. Corporate adviser Conrad Liveris examined 2016-2017 ASX disclosures, concluding Australia needs to judge chief executives on the value they bring, rather than overpaying them.

Some years ago the Productivity Commission similarly found the mechanism by which Australian chief executives’ worth is measured is questionable.

The Yes Minister episode about the hospital with no patients is a salutary lesson in misplaced priorities. Inappropriate remuneration structures lead to inappropriate behaviour and outcomes. Remuneration policy needs to drive good behaviour and performance, before bosses (in Australia at least) will be appreciated.

A pay gap can cause a culture gap

If a company or board’s relationship with management is characterised by too much chumminess and an undue pay gap, you can be sure its culture isn’t healthy, no matter what the profit margins might be.

Telstra is defending its executives’ pay while the company’s share price drops. Are staff appreciating their bosses there?

When managers’ remuneration is out of line with their actual performance, staff (and sometimes investors) can see it, and the effects on company morale and endorsement will be negative.  Boards need to keep this in mind when executives’ pay structures are decided.

Qualities and skills we would appreciate

If management is generally much better off financially than the average employee, why bother with Boss Appreciation Day?

Perhaps because some bosses:

These benchmarks are a start for how executives and managers can be appreciated. Without such benchmarks, bosses might well continue to be better remunerated than staff, but their perceived value is another question altogether.

In the meantime, in lieu of Boss Appreciation Day, it’s wise to preserve a careful balance between socialising and maintaining one’s own counsel when fraternising with management, just as the aforementioned US survey indicates. You are the boss of yourself, and that requires healthy boundaries, an open mind, a solid work ethic and a realistic but positive sense of who and what you are.

NOW READ: What are you worth? Startup salary guide sheds light on how much startup founders are paying their staff — and themselves