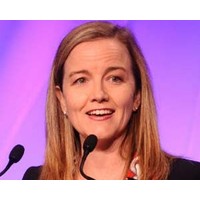 When she was 15, Cynthia Whelan, now banking giant Barclays’ Australia-New Zealand chief, left school to become a professional ballet dancer. She studied under some of Australia’s most accomplished dancers, but when she was 18, her future in classical ballet was undone by injury.

With one dream ended she had to find another profession, and she decided on finance.

It’s an unusual leap, but Whelan tells LeadingCompany there are similarities between the two fields.

“To be good at an art form like ballet or investment banking, you need discipline, a great deal of professionalism, good partnerships and teamwork, and flawless execution. A lot of the discipline and resilience I learned as a ballerina, I’ve bought to my investment banking career.”

It’s a full day for Whelan, who, after winning the Hudson Private and Corporate Sector award at the Telstra Business Women’s Awards in Sydney last night, has a busy day of media interviews. That’s on top of her demanding daily role heading the Australia-New Zealand arm of one of the world’s largest investment banks. She only has 10 minutes to give to LeadingCompany, but her answers are precise and quickly delivered. She easily gets through all our questions with time to spare.

Investment banking is a male-dominated industry, but when Whelan started her career at UBS, she found herself answering to a female boss: senior finance executive Sharon Mitchell. “It was very unusual in those days,” she says. “As I’ve become more senior, I’ve certainly become aware of the lack of women, especially in senior positions.

“That’s one of the reasons I’m delighted to win the award. I was very fortunate to have a strong female role model… I hope I can be a role model for other women in finance.”

“It was one of the greatest opportunities, and also one of the greatest challenges I’ve faced,” she says of her time in Asia. “My career and management experience had all been formed in Australia. Taking those skills I had, and trying to overlay them on 14 different cultures… it was a real challenge and opportunity. I really learnt to appreciate the value of diversity.”

During her time in Asia, Whelan learnt to adjust her behaviours and mannerisms to better fit local norms. She gives us an example from her time in Thailand:

“When I went to Thailand, I did what I always do, which is walk into a meeting, shove out my hand and and say, ‘Hi, I’m Cynthia Whelan’. The men uncomfortably shook my hand.

“It didn’t occur to me why that was until I looked around. In Thailand, women don’t shake hands. They bow, even in business contexts. As soon as I became aware of that, I did the little bow at every meeting, and everyone was comfortable.

“There’s no reason to pursue a business greeting that is very common in the Western world, but isn’t the way you engage in Thailand.”

There for the air support: Whelan the leader

Whelan has just returned from a one-week strategic leadership program at Oxford University, which included an intense investigation into her leadership style. She’s got a strong interest in leadership education, saying she always encourages people to invest in their leadership development.

Whelan stresses she’s not a micromanager. “I describe myself as providing ‘air cover’,” she says. “I’m a safety net. I want to see people flourish and grow. If they need me for support, I’m always there to pick up the pieces.”

How to get to the top

Whelan names three characteristics she thinks are crucial to rise to the top of the corporate world: tenacity, resilience, and strong communication skills.

“I think strong interpersonal skills are really, really valuable,” she says. “It’s been one of the hallmarks of my success – being able to develop relationships with a variety of people at all levels of organisations. The people who are more successful in business, they’re the ones who are able to read the people around them.”