Bed of roses: Meet the woman leading entrepreneurship into the next generation 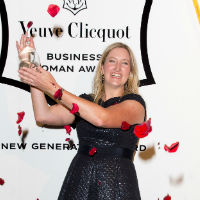 Sarah Sammon still remembers getting the first order for her freeze-dried rose petal business in 2004, the morning after she quit her part-time job at a bank.

“I’ll never forget it; I had literally just resigned from my part-time job and I was sitting there on Monday morning thinking, ‘oh my goodness, how am I going to pay my rent?’” Sammon told SmartCompany.

It was then that Simply Rose Petals received its first order – a significant export order from China, which was enough to cover Sammon’s rent and get the ball rolling.

Fast forward just a few years and the company now caters for 2000 weddings a year and exports to 15 different countries. While Sammon won’t reveal company turnover, she says revenue has grown around 75% this calendar year.

Sammon’s achievements were honoured last night at the Veuve Clicquot New Generation Awards in Sydney, where she received the top honour, ahead of a group of impressive nominees, including Jodie Fox of Shoes of Prey and Emma Isaacs of Business Chicks.

The accolade coincides with celebrations for International Women’s Day this Sunday, as the world recognises the achievements of women.

“I’m still in a bit of shock,” says Sammon, who scores a trip to France out of the win.

“I’m just so excited and just so honoured to be part of this group of amazing woman,” she told SmartCompany.

And it wasn’t just Sammon’s co-nominees that were impressive guests last night, judges for the inaugural award included some of Australia’s most impressive female entrepreneurs: Carolyn Creswell, founder and managing director of Carman’s Fine Foods; Jo Horgan, founder and chief executive of Mecca Cosmetica; and Kristina Karlsson, founder of kikki.K.

Creswell told SmartCompany this morning she was incredibly impressed upon meeting Sammon and is excited for her future.

“You just have to be around her for five minutes to get goosebumps from someone so passionate,” says Creswell, who believes innovation was the deciding factor in Sammon’s win.

“For me it was about the innovation of what she was doing, the new technology, being a farmer to be able to adapt to all the different things thrown at her,” she adds.

Sammon grew up on a farm but studied science before moving overseas to become a skiing instructor. When her uncle passed away, she and her mother took over the family’s rose farm of 1000 trees in Swan Hill, Victoria.

After their first crop was wiped out due to disease in the irrigation water, a fortuitous spot at Australia’s largest bridal expo led to a flood of interest in the rose petals.

“We started doing research – and this was at a time when e-commerce was just coming to the fore – and we found in the US and UK they were taking steps to ban the use of paper confetti,” says Sammon.

Realising no one in Australia was producing rose petals and sensing an increasing global demand for the product, Sammon quit her job the weekend after the bridal expo.

Simply Rose Petals is now the largest producer in the southern hemisphere of freeze dried rose petals for weddings, beauty salons and hotels, along with complementary rose petal products such as confetti cones and petal cannons. The farm now boasts more than 6000 trees.

The business is planning to launch its culinary range of frozen rose petals for food garnishes across the manufacturing and hospitality industries in coming weeks.

“People thought we were crazy to start such a niche business, but we were very fortunate that e-commerce has really given us the ability to market to the world,” says Sammon.

And Sammon’s not resting on her laurels after last night’s achievement, saying she hopes to inspire the next generation of young female leaders.

“For me – with my experience as a female working in agriculture – it is very male dominated. It is not uncommon for me to be sitting around the table with 50 males famers and just a handful of women,” she says.

“I’m really hoping to inspire the young female entrepreneurs and encourage other female farmers. It is a big challenge, but the rewards are there.”

For Creswell, last night’s awards were a chance to reflect on her own success as a woman in business, and use her position to push other females forward.

“I feel very blessed in my career and the same has started to happen now for Sarah,” she says.

“Life is s a journey and not a destination, if we aren’t celebrating the women around us, that’s such a shame. Why should we celebrate women?”