BEST OF THE WEB: Snowden, the business of Buzzfeed and the first smile 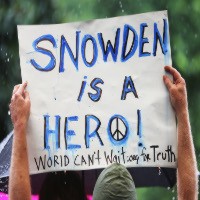 If there’s one thing you take the time to read this week, let this be it. At 7500 words it’s nearly the length of a novella, but Wired’s interview with Edward Snowden is a visually beautiful and detailed account about one of the biggest stories of our time.

The in-depth interview was written after James Bamford spent three solid days over several weeks with the 31-year-old American in Moscow.

The meeting, which took months to set up, and journey’s across several countries, arose from Banford’s one burning question: “What drove Snowden to leak hundreds of thousands of top-secret documents, revelations that have laid bare the vast scope of the government’s domestic surveillance programs?”

While the tone of the piece is a touch star-struck, the story of Snowden’s work for CIA and NSA, and his disillusion there, is as compelling as any fictionalised Hollywood thriller.

We learn that there may in fact be a second document leaker and the details of a government program allegedly used to prevent a foreign cyberattack. According to Snowden, the software, called “MonsterMind”, scans traffic patterns to spot the signs of an incoming attack. After identifying potential digital assaults, MonsterMind blocks or kills them.

The business of Buzzfeed

BuzzFeed is worth at least its latest $850 million valuation, and probably much more, writes Felix Salmon. While others covered the media of the story of the week with a snarky undertone, Salmon clearly identifies the game Buzzfeed is on and why we need to take notice.

Buzzfeed is a media company, but it’s not a content company per se; its core competence is the technology of marketing.

Overhyping content to drive clicks to sell to advertisers is not Buzzfeed’s game (unlike Upworthy and Business Insider), points out Salmon.

BuzzFeed proves with its content that it knows how to reach huge, young, mobile audiences. Then “it can then sell that secret sauce to advertisers, and help them reach the same audience, using the same tools.” That’s a completely new game.

“The big message is that it wants, in founder Jonah Peretti’s words, to be “the number one digital media brand”. That means beefing up the current editorial product; investing massively in video; and an aggressive international expansion, into a number of brand-new languages and cultures,” says Salmon.

A timely piece on why laughter, smiles and tears look so similar? Turns out because they all evolved from a single root.

“Long before written symbols, even before spoken language, our ancestors communicated by gesture. Even now, a lot of what we communicate to each other is non-verbal, partly hidden beneath the surface of awareness. We smile, laugh, cry, cringe, stand tall, shrug,” Micahel Graziano writes.

It certainly makes you wonder, if we should ever take a smile at face value.