Not the time, Richard: Why Branson’s attempt to console Virgin’s laid-off staff was tone-deaf

A common thing for me right now is seeing something mad in my newsfeed and thinking: ‘Ha! Classic bit of work here from Betoota or The Onion. They’re so on top of their game at the moment.’

Then you realise it’s not them…

It’s real news. But so insane that it feels like the work of comedy writers.

Last week, from the workplace restructure comedy genre, this from Virgin Australia. 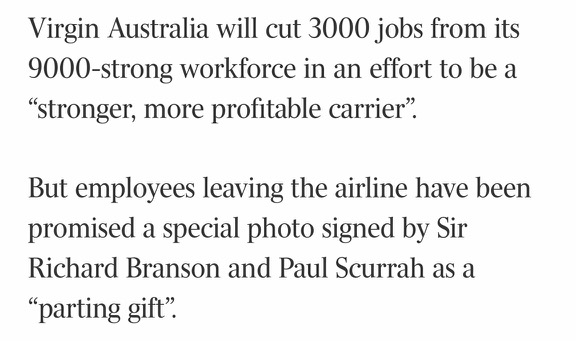 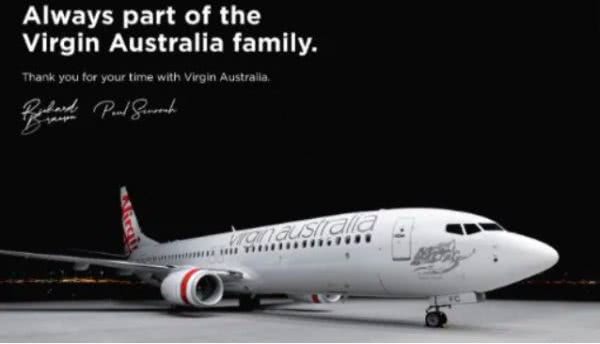 You’ve been through months of uncertainty and stress. There’s a fair chance you’ll never work in the aviation industry again.

You break the news to your family: ‘Looks like my job’s gone. But on the upside, check out the Branson autograph on this sweet photo of a plane! So great he was able to take the time to do that for us, he’s a very famous guy.’

Look, the situation could be worse. The reality of 2020 is that jobs will go, some of them forever. Most people will find something else to do — after they go through months, or years, of hardship.

Unlike some company collapses, Virgin staff will get all their entitlements. Some of their benefits will be extended.

But those basics get overlooked when you pull off a tone-deaf dick-move like this.

Now is not the time

I have no inside knowledge of this, but I doubt it was CEO Scurrah’s idea. It feels very Branson-y.

It’s what happens when your default setting is marketing. It’s the first tool out of the box every time.

I’m a lifelong marketing guy, like my dad and my grandfather before him. Good marketing is a joy. Its margin-expanding powers pay the wages of a lot of people in non-marketing roles — a point lost on most CFOs.

But sometimes the best form of marketing is no marketing.

The best approach is just to do the right thing by your people.

So they, in turn, can do the right thing by your customers, and your company becomes a pleasure to work with. Ironically, this is a message Richard Branson often delivers, between bikini-girl photo ops.

I’m a weekly Virgin flyer — or was until March — and their staff are delightful.

I marvel at their saintly patience, dealing with customers who can’t understand why a 45-litre hard case won’t go into a 10-litre gap. They’re locked in a loop for five minutes, pushing it again and again, as if one more shove might alter the laws of space.

I wouldn’t last until lunchtime trying to cope with those customers.

Those staff deserve better than a Branson autograph.

There’s a time and a place for the show pony Mr Charisma CEO and this year isn’t it.

In good times, there’s more scope to be like: ‘Be more like me, because I’m rolling in cash and hanging with famous friends. Embrace my passion for excellence and you too could live my dream.’

Please, not when everyone’s broke and scared. Right now I’d rather draw inspiration from ANZ bank CEO Shayne Elliott. Nobody could accuse him of flamboyance.

I was impressed by one of his first comments when everyone got sent home to work. For many of us business types, working at home is dull but fine. I have space, no distractions and a nice espresso machine.

Elliott pointed out: “Not everybody is living in a nice cosy family situation at home. Some are sharing houses, some are on their own, and that can be quite isolating and difficult for people.”

Refreshing awareness from a major bank boss. Someone who gets what it’s like outside the plush head office. I asked around some ANZ people and they said “he has a very high empathy for his employees”.

We all need less ‘how good am I?’ and more ‘I get what you’re going through and I really appreciate your efforts’.

Is this a permanent change?

Are we seeing a realisation that extreme individualism isn’t going to deliver the benefits we were promised?

Will there be a greater awareness that working together can bring better results?

I don’t know, even next month is a mystery at this point. But it’s refreshing to see some signs of basic humanity.

Particularly when so many tech success stories come from systems optimised to squeeze the last cent out of hapless frontline workers.

Viral marketing at its worst

A final word on the always-be-marketing mindset.

Most pubs and restaurants are working hard to do the right thing to slow the virus. My local has Grand Canyon-like table spacing, hand sanitiser everywhere, and cutlery issued from a locker like its military equipment.

There’s a nice vibe between patrons and staff. Everyone’s pitching in so pubs can stay open.

You scan the QR code to sign in your personal details, happy to do the right thing. Then… some back-end marketing creep sneaks in with this. 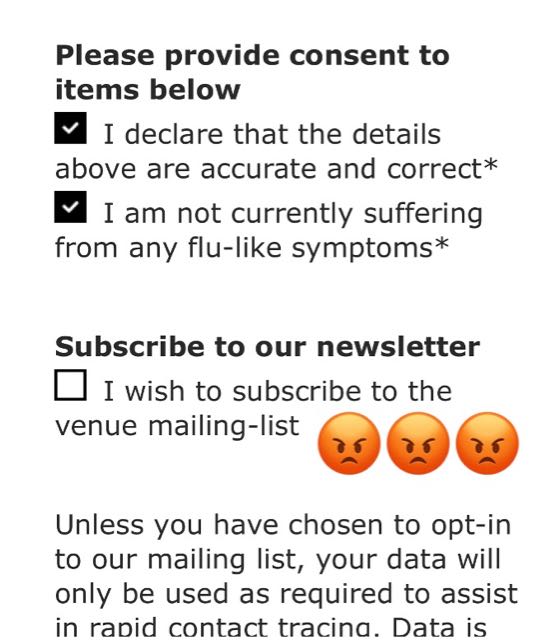 (Emojis are my addition.)

Yep, amid a public health crisis, an ideal data harvest opportunity. So you can spam us with your Tuesday trivia night and $9.99 steak deal.

I know it wasn’t the pub’s idea, it’s the app developer’s.

But honestly, marketing people. If you don’t get that this is not OK, take a long holiday and think about a different job.