Charting the seas of leadership with Ann Sherry 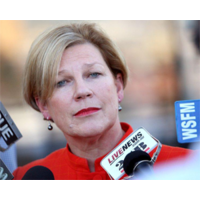 Studies: Radiography, retrained with a degree in politics and economics

Motivation: “When opportunity comes, I grab it.”

Top tip for leadership: “Sometimes a great idea or a great initiative doesn’t get off the ground, not because it’s a bad idea, but because the environment is not right. Sometimes you’ve got to wait or find or construct the conditions to make it work.”

Ann Sherry is on the line. The background sound of Sydney’s hustle and bustle can be heard as I wait for a voice. Time seems to stretch when speaking to someone with so many responsibilities, like each second is robbing valuable face-time from one of the global companies or grass-roots organisations with which Sherry is involved.

She is a board member of financial institution ING Direct Australia, The Myer Family Company Holdings, the Australian Rugby Union and indigenous organisation Jawun.

But her day job is as chief executive of Carnival Australia, part of the global cruise line that runs 100 ships under brands such as Costa, Carnival, P&O, Cunard and Ibero.

Sherry tells LeadingCompany having fingers in so many pies is a good thing.

“I bring knowledge and insights from the different components of my working/outside work life to everything I do, so I learn things in each of those domains that I think help other parts of what I do as well, including the businesses I run.”

What started as a potential career in radiography has seen her move from hospital to boardroom, a move which has defied conventional career advice: “I haven’t felt particularly constrained or excited by that.”

Gen Y workers, rightly or not, are criticised for switching jobs, but Sherry is an example of switching the right way. She says it gives “stretch” to learn new tasks and adapt to new situations. In a speech to graduates of the University of Technology, Sydney in October 2011, she said “change is a career driver, not an enemy to be feared”.

“I don’t need to tell you the world is changing or that the pace of change has never been as fast. You need to adapt as power bases change,” she says.

Before joining Carnival, Sherry was the chief executive of the Bank of Melbourne and Westpac New Zealand. Taking it back to the start, Sherry quit radiography and went back to university to study politics and economics. She was drafted into the newborn Federal Department of Productivity under Ian Macphee. She worked with prison leavers in the UK to find them work, and moved back to Melbourne to work in industrial relations. She then worked for the Victorian government as head of the Office of Pre-school and Childcare and then at the Office of the Status of Women under former prime minister Paul Keating.