Compassion, Carolyn Creswell & the St Kilda Gatehouse: the most likely of unlikely partnerships 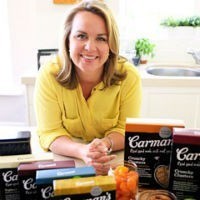 You wouldn’t normally expect to find a connection between a drop-in centre for street based sex workers and a member of the BRW Young Rich List. But there’s an odd symmetry to this, because neither the St Kilda Gatehouse nor entrepreneur Carolyn Creswell are what you might expect either.

The Gatehouse is a community space in Greeves St, the epicentre of St Kilda’s street sex worker district. It’s a point of contact and a haven for the women who do street sex work, for many of them it is the only safe space they have.

Sex workers are not a homogenous group. Some sex workers make an informed, empowered choice to enter into sex work and do not want or need intervention. Indeed, they would, quite rightly, find any attempt at intervention patronising and insulting. One of the greatest risk people like this face is rejectionection, because the myths about sex workers can be so stigmatising.

As much as this is undoubtedly true for some sex workers, it is rarely the case for the women who come to the Gatehouse. Many of them are there because of what gatehouse CEO Sally Tonkin describes as the triple cocktail – abuse, addiction and social isolation.  The stories the women have told me often start young, way too young. No matter how progressive your views about sex work, no one believes that 12 or 13 year old girls fleeing abusive homes can make an informed choice to become a sex worker.

Gatehouse is running a project to support young girls in finding other alternatives, but if they can’t find another option, what happens to those little girls when they turn 35? 45? 60? When they’ve been living and working on the streets for decades and the opportunities many of us take for granted have never been open to them?

Many of them come to Gatehouse, because it is the only refuge they have. While Gatehouse does offer help to navigate pathway off the streets for the women who want it, it primarily exists as a refuge, not a rescue centre. It is a place of community, of love and respect, and the Gatehouse staff know that this is the most important thing they can do for the women who come to them.

It also provides a place of safety, because their work can be dangerous. Although, as Sally Tonkin points out in a Ted talk well worth watching, street based sex work is not dangerous because the women are working with dangerous animals or heavy machinery or toxic chemicals, and it’s not that they are a danger themselves. The thing that makes it dangerous is men. And sometimes the women need a place they can go to seek shelter from that danger.

Carolyn Creswell is the new patron of St Kilda Gatehouse, and last week we talked about how she became involved with Gatehouse and why it matters so much to her. The conversation was an antidote to weeks of watching politicians baffled by public reaction to their unalterable sense of entitlement to privilege.

Carolyn is the entrepreneur behind Carman’s Muesli, a tiny cottage industry she bought for $1000 when she was 18 years old, which has now become a multi-national export business. The business has been named one of BRW’s 100 Fastest Growing Companies and Carolyn herself has a slew of awards.

She first heard about Gatehouse when Tracy Connelly was murdered in her van, which was parked across the road from Gatehouse. Hundreds of local people came to a vigil in her honour. We went to remember her, mourn her death and to utterly reject the notion that women’s lives can be devalued or their murder made less tragic because of the work they do.

Not long after that, Gatehouse started raising money to fund opening the drop-in centre 5 days a week. The Gatehouse Unlocked campaign was a huge success and it was at this event that Carolyn met Sally Tonkin.

“I went to meet Sally and the other Gatehouse staff and was so overwhelmed by the compassion and respect they had for the women. It’s so easy to have such preconceptions about women who do this work, I really learned from them how important it is to let those go and see the person not the prejudice”

“So I asked Sally how I could help, she said they needed a patron. The idea was that it didn’t necessarily have to be someone who had been through this themselves, but it had to be someone who could advocate on their behalf.”

“People do care about others, it’s not always about self-interest. It’s about saying this is our backyard and these are our women and our community and if you live with a grateful heart you need to give something back.”

“I’m very grateful for the opportunities I’ve had. I wouldn’t been here now without them. And it’s not just about being grateful, it’s about understanding that you’ve had opportunities that others didn’t and you have everything you have because of that, so you have to give something back. You have to share some of it with people who didn’t have those chances. Because that’s really the only difference between us.”

“Gatehouse is a beautiful space in terms of being able to give people some self-respect and opportunities if they want them. It’s a spirit of community. It’s easy to sit in a position of judgement when you don’t know anything about other people’s lives, but once you become part of that community you realise how important it is to just be supportive and to know that this is not about poor choices, it’s often about no choices. It could have happened to any of us.”

It’s easy to admire Carolyn for her success in business. What makes her extraordinary, though, is her compassion for people who live a very different life to hers, and the energy and effort she devotes to sharing the opportunities she was given.