David Thodey to retire as Telstra chief in May 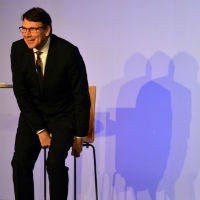 David Thodey will step down as chief executive of Telstra in May, handing the baton over to chief financial officer Andrew Penn

One of the most influential people on the Australian tech scene in recent history, Thodey has led the telco for the past six years and played an integral role in securing Telstra’s $11 billion deal with the National Broadband Network.

The former chief executive of IBM is also credited with boosting the value of Telstra from around $40 billion to as high as $80 billion.

Telstra said in a statement this morning Thodey will retire on May 1, at which time Penn will take over as chief executive. Thodey will assist Penn until the end of the current financial year and be available to Telstra until late August.

The shock announcement caught investors by surprise, with Telstra’s share price dipping and remaining flat for most of this morning’s trading session. Telstra shares are currently priced at $6.59 apiece.

“It is a testament to David Thodey that we were able to select the next chief executive from within the business,” Telstra chair Catherine Livingstone said in the statement.

“Andy is a seasoned executive in global markets with proven capability to lead organisations through significant transitions and major expansion.”

“He has played a key role in developing Telstra’s long-term growth strategy and we are delighted he will continue to lead Telstra’s plans to increase customer advocacy, core business value and capitalise on new growth opportunities.”

In the same statement, Penn said he will continue Thodey’s efforts to transition Telstra into a “customer-focused organisation”.

“The Telstra Board and leadership team has developed compelling plans to 2020, and beyond, which will expand our capability as an increasingly global connectivity company and position us for future growth,” Penn said.

Foad Fadaghi, managing director of independent technology analysis firm Telsyte, told SmartCompany there is no doubt that Thodey is “handing over Telstra in a much better position” compared to when he took on the top job in 2009.

“Not just in the share price, but in most of the market metrics that are critical, including things like mobile subscribers,” Fadaghi says.

Fadaghi says Thodey “steadied the ship” at Telstra at a time when the company “needed a bit of humility and a bit of steady, Australian management”.

“It was off the back of the period under Sol Trujillo. It was a tumultuous time and he really put that side of the business to bed,” Fadaghi says.

The result was a drastic improvement in the reputation of Telstra, which Fadaghi says is now extremely well-regarded among the telcos of the world as a “star performer”.

But Fadaghi says Thodey’s legacy means the “bar is set quite high” for incoming chief Penn and it will likely be “more difficult to achieve the next stage of growth” for Telstra.

“The challenge overall will be in Telstra’s strategy to become a large player in the Asia-Pacific region,” he says.

“It’s up for debate but many analysts believe it is going to be a difficult task to achieve these Asia-Pacific goals.”

“Thodey spoke of turning Telstra into the next Google and Penn has talked about turning it into an Apple. While those are lofty ambitions, we are yet to see an incumbent telco transition into that type of business.”

“There’s also some risk in positioning the business like that to investors.”