Diary of an Entrepreneur: How Michael Greenberg founded Skechers and why he always looks down 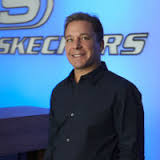 Michael Greenberg is a bundle of energy. He sits at the edge of a big empty boardroom table with his feet tucked underneath him, clad of course in a pair of Skechers.

As the founder and chief executive of the global footwear company, Greenberg walks the walk. He admits the concept for Skechers was “a need to make money”.  After working in family business LA Gear in the 80s, in 1992 he left to start Skechers.

“There was no gap in the market and no opportunity,” Greenberg says.

“There was no need for another shoe brand.”

But Greenberg’s expertise was in footwear so he started Skechers anyway. Fast forward 22 years and Skechers is now one of the biggest footwear brands in the world. By the end of 2014 it will have hit $US2.4 billion ($2.7 billion) in turnover with projections of $3 billion in 2015.

Greenberg says he doesn’t sleep that well, averaging only four to five hours’ sleep a night.

“If I had the ability to change that I would,” he says. “It’s either genetics or the business.”

Greenberg is most often kept awake thinking about Skechers’ employees.

“When you run a big company you have a lot of people who depend on the stability and wellbeing and health of the company. I’m not saying that keeps me up but it is certainly on my mind,” he says.

Greenberg usually gets out of bed at 6am and has a coffee and does some exercise.

He’s a keen runner and while in Sydney on the weekend Greenberg crashed the Sydney marathon.

“I was with my girlfriend Tracey who is big into fitness and she came up with the idea of let’s go join in on the marathon, so we dropped out of our hotel and dropped into the marathon and did 10km,” he says.

Of the new focus for the business, Greenberg says: “I guess ignorance is bliss.”

“We felt that we could achieve quality, very credible, performance-based footwear. Today we are known for lightweight running shoes.”

“We’ve achieved a lot of accolades from true hard core running editors… and that’s something you can’t buy with advertising, you can’t demand it, you can’t will it, it comes with whether or not the product is credible,” Greenberg says.

But back to Greenberg’s morning routine: coffee is key.

“Right before the coffee I tend to turn the Blackberry on and I rifle back at a barrage of emails,” he says.

Greenberg has key people he checks for emails from and certain figures he looks at each day.

“I look at comp sales which are year over year, either daily, weekly, monthly or annually. I look at incoming order bookings. They are the numbers I look at. I also look at internal margins,” he says.

Each day is different for Greenberg and he says he never knows what is going to unfold.

“There is always going to be some great surprises but it is the way you manage the surprises and how you execute throughout the day,” he says.

“But just keeping a very positive attitude through the course of the day and knowing you can manage anything that is thrown at you.”

If Greenberg is not travelling and is at his office at Manhattan Beach he says it’s “highly unlikely” he’ll leave the office when it comes to lunchtime.

Greenberg doesn’t eat chicken or red meat and tries to stick to a healthy diet.

“I have the same thing for lunch every day: quinoa and garbanzo bean salad.  It’s healthy and obviously how you eat is how you feel,” he says.

The hardest thing for Greenberg is switching off.

“Whether I’m in the office or out of the office I’m always in work mode but can still be doing something that is personal and private or enjoyable but I am still attached to work,” he says.

“Unless I am getting a massage I have my smartphone with me. I am always connected but I enjoy being connected. I don’t know if I truly switch off.”

Greenberg says he makes it a practice of trying to be present in the company of others when it is not work related.

“I can’t tell you that I have mastered that but it is always in my mind to be present and respectful, but I do go off course often,” he says.

In the evenings, Greenberg says he usually catches up on the news and reads the paper or a magazine.

Then it’s back for another bad night’s sleep.

“I wouldn’t say that I fall asleep for more than a two hour period,” he says.

Looking forward for Skechers, Greenberg is going to be driving Skechers’ international growth.

Skechers has 1000 stores and Greenberg is planning an additional 180 stores.

“I see myself in the same role as I am today over the next five years. I am enjoying it. I love the business and I love the people that I meet,” Greenberg says.

“Nothing gives me more enjoyment than seeing the product on consumers’ feet.  When I landed in Sydney I was going through customs and I pretty much walk with my head down, not because I’m depressed but I am certainly studying the shoes that I see on people’s feet,” he says.

Greenberg says by the time he got to the front of the line he had seen a dozen pairs of shoes.

His advice for fellow entrepreneurs is to “never give up” and “renegotiate all the time on everything”.

Greenberg says you can take this advice in a lot of different directions.

“No as a word does not mean no, it just means not right now. If anybody tells you no, keep knocking on the door. Go back and back again. We all know the saying the squeaky wheel gets the grease, so squeak a lot. Be repetitive,” he says.