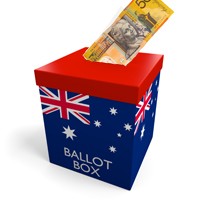 Retailers are likely to see a downturn in business over the next six weeks as consumers delay purchasing decisions until after the federal election, industry experts say.

Prime Minister John Howard’s move yesterday to call an election for 24 November means we are in for a relatively long six week campaign. For consumers, that can mean an extended period of uncertainty about what the future holds, which makes them less inclined to spend.

Brian Walker, the managing director of retail consultancy The Retail Doctor, says in the past election campaigns have had a tightening affect on consumer behaviour.

“The classic big ticket items tend to be affected most directly, especially items that involve credit such as white goods, high-end fashion, as well as IT and media equipment,” Walker says.

He advises retailers to maintain carefully targeted promotional activity and ensure inventory levels are tight to get them through any downturn experienced during the election campaign.

IBISWorld chairman Phil Ruthven agrees that people tend to take a wait-and-see approach during election campaigns, which sees spending curtailed on consumer capital goods like cars and plasma TVs rather than household basics such as food.

But although Ruthven estimates the election campaign could have a 5% to 7.5% dampening affect on these sectors, he says that spending tends be deferred rather than abandoned entirely.

“The key word is deferral – spending usually picks up again very quickly in my experience, especially with Christmas coming up. I’d say the quarterly reports wouldn’t show any difference, because that spending does generally come back,” Ruthven says.

But elections may not be all bad news for retailers. According to Westpac senior economist Matthew Hassan, people who expect to be on the receiving end of election sweeteners may actually increase spending.

“The impact of these things can be unexpected. For example going into this election a lot of the focus will be on WorkChoices, so those affected by it may believe that with some sort of roll-back of that policy they may see some extra money in their pockets,” he says.

And, Hassan says, the prospect of a change of government may also be putting a spring in the step of some consumers.

“We’ve seen consumer sentiment was around record highs of 10% or higher, and although there are a number of factors to that, such as employment growth and tax cuts, when you break it down by voting intention you see it has been the ALP voters who have had a bigger jump in sentiment,” he says.