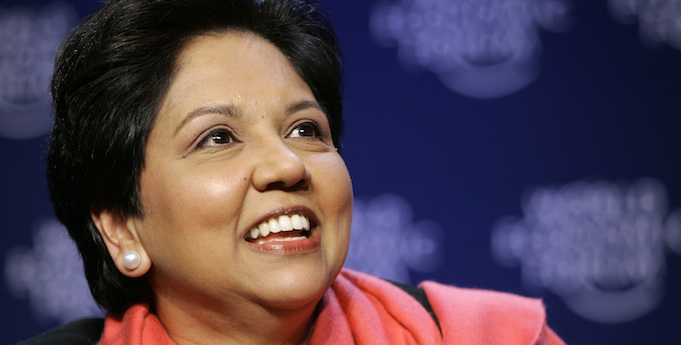 After 12 years leading one of the world’s most well-known food and beverage companies, Indra Nooyi will step down as chief executive of PepsiCo in October.

Nooyi has spent the past 24 years working at PepsiCo, including as a chief strategist and chief financial officer, before taking over the mantle as chief executive and president in October 2006.

Ramon Leguarta will succeed Nooyi as chief executive officer at the start of October, with Nooyi to continue to serve as chair of the PepsiCo board until early-2019.

The start of Nooyi’s tenure as chief executive coincided with the global financial crisis but over the next decade, she set about transforming PepsiCo into a consumer goods brand that is firmly grounded in the company’s “performance with purpose” philosophy, and with an eye on changing consumer preferences for healthier snacks.

Today is a day of mixed emotions for me. @PepsiCo has been my life for 24 years & part of my heart will always remain here. I’m proud of what we’ve done & excited for the future. I believe PepsiCo’s best days are yet to come. https://t.co/sSNfPgVK6W pic.twitter.com/170vIBHY5R

“Today is a day of mixed emotions for me. This company has been my life for nearly a quarter century and part of my heart will always remain here”, she said in a statement on Monday.

Nooyi’s has consistently featured among the ranks of the most powerful women in the world, and she has regularly spoken about how her childhood growing up in Madras in India influenced her approach to business and leadership.

She’s also offered frank assessments of the challenges involved in raising a family while climbing the corporate ladder, and continues to push for greater diversity in business.

From designing the perfect product, to whether or not we can really ‘have it all’, here’s 11 insights from Nooyi.

On staying true to yourself

“In those days [growing up in Madras], there was a well-defined conservative stereotype, so everything I did was breaking the framework. I played in a rock band. I climbed trees. I did stuff that made my parents wonder: ‘What the hell is she doing?’ But I was also a good student and a good daughter, so I never brought shame on the family, And I was lucky that the men in my family thought the women should have an equal shot at everything.

“I’m still a bit of a rebel, always saying that we cannot sit still. Every morning you’ve to wake up with a healthy fear that the world is changing, and a conviction that, to win, you have to change faster and be more agile than anyone else.” — Harvard Business Review

“Every night at the dinner table, my mother would ask us to write a speech about what we do if we were president, chief minister or prime minister — every day would be a different world leader she’d ask us to play. At the end of dinner, we had to give the speech, and she had to decide who she was going to vote for.

“Even though my mother didn’t work and didn’t go to college, she lived a life vicariously through her daughters. So she gave us that confidence to be whatever we wanted to be. That was an incredibly formative experience in my youth.” — Business Insider

On why companies need to continually reinvent themselves

“It’s been a long time since you could talk about sustainable competitive advantage. The cycles are shortened. The rule used to be that you’d reinvent yourself once every seven to 10 years. Not it’s every two to three years. There’s constant reinvention: how you do business, how you deal with the customer.” — Harvard Business Review

On having ‘purpose’ in business

“When I became CEO in 2006, I did a series of town hall meetings with employees. Few said they came to work for a paycheck. Most wanted to build a life, not simply gain a livelihood. And they were well aware that consumers cared about health and wellness.

“We realised we needed to engage our people’s heads, hearts and hands. We had to produce more products that are good for you. We had to embrace sustainability. Purpose is not about giving money away for social responsibility. It’s about fundamentally changing how to make money in order to deliver performance — to help ensure that PepsiCo is a ‘good’ company where young people want to work.

“Purpose doesn’t hurt margins. Purpose is how you drive transformation. If you don’t transform the portfolio, you’re going to stop top-line growth, and margins will decline anyway. So we don’t really invest in ‘purpose’, but in a strategy to keep the company successful in the future.” — Harvard Business Review

On diversity and talent

“The way we develop, recruit and train people will have to change radically. Success will be fueled by diverse talent, and there will be a war for that talent.

“Ultimately you have to think of diversity in many categories: ethnic, cultural, religious and generational. No part of society should be excluded from the potential talent pool. Bringing talent in is easy; developing and retaining it is difficult. The only way we will hold on to the best and brightest is to grasp them emotionally. No one may feel excluded. It’s our job to draw the best out of everyone. That means employees must be able to immerse their whole selves in a work environment in which they can develop their careers, families and philanthropy, and truly believe they are cared for.” — Enactus Career Connections

On what makes a good product

“For me, a well-designed product is one you fall in love with. Or you hate. It may be polarising, but it has to provoke a real reaction. Ideally, it’s a product you want to engage with in the future, rather than just, ‘Yeah, I bought it, and I ate it”. — Harvard Business Review

On becoming a chief executive

“Even the day before they told me that I was going to be CEO, I didn’t think I was going to be CEO. So, there wasn’t a plan to become CEO. The plan was to just keep doing a very, very good job, and making sure the company was in a good place. I think one thing just led to another.

“The biggest surprise in becoming CEO was that when you ascend to the number one job, you are ‘it’, as they say. When you’re president of the company, or CFO, you still have a very important job. But there’s always a CEO out there who was on the frontline, who was being focused on. And when you become CEO overnight you are the person calling all the shots, you’re responsible for making sure you get all the information from the company, crystallise it down to, simple ideas, and then tell the organisation what to do.” — Freakonomics

On being a female business leader

“I’d say that when you become a CEO and you’re a woman, you are looked at differently. What you say people do – they say things like, ‘Well a guy CEO wouldn’t have said that. Or a guy would have said it differently’. You are held to a different standard, there’s no question about it.

“It’s not that you’ve become CEO and now you get a hall pass. You don’t. Everything you say, you do, gets analysed a different way. But in any industry, in any profession, in any part of society, trend-setters went through this sort of scrutiny, and criticism, and commentary. I think this group of women CEOs, all of us are going through that right now. Hopefully as the numbers get bigger — and I hope they do — nobody’s looking at us as women CEOs, but just as leaders of big enterprises. I hope that day comes sooner than later.” — Freakonomics

On whether women can ‘have it all’

“I don’t think women can have it all. I just don’t think so. We pretend we have it all. We pretend we can have it all. My husband and I have been married for 34 years, and we have two daughters. And every day you have to make a decision about whether you are going to be a wife or a mother, in fact many times during the day you have to make those decisions. And you have to co-opt a lot of people to help you. We co-opted our families to help us. We plan our lives meticulously so we can be decent parents. But if you ask our daughters, I’m not sure they will say that I’ve been a good mom. I’m not sure. And I try all kinds of coping mechanisms.

“You know, you have to cope, because you die with guilt. You just die with guilt. My observation … is that the biological clock and the career clock are in total conflict with each other. Total, complete conflict. When you have to have kids, you have to build your career. Just as you’re rising to middle management, your kids need you because they’re teenagers, they need you for the teenage years.” — The Atlantic

“Whether you are a male CEO or a female CEO, it is a business imperative. Because if you look at graduating seniors from colleages, more than 50% are women. More than 50%!

“And if you look at the best grades, they are being gotten by women. So if you really want companies to be successful, we have got to draw from the entire pool, not just try to say: ‘Hey, we are going to exclude a portion of the population’.” — CNBC

On managing her time

“I make a list every day of 50, 60 items, and I tick off what I’ve done — tiny things. If I’m carrying two to three items over to the next day, it feels great. People say multitasking isn’t very good. If I didn’t multitask, I have no idea how I’d survive.” — Fortune