Elizabeth Proust AO on board and executive leadership 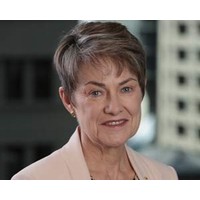 For Elizabeth Proust AO, life on the board of troubled funds management company, Perpetual, is not easy just now.

Perpetual, which has $22.6 billion under management, posted net profits of $26.7 million in August, down from $62 million the previous year. Its new CEO, Geoff Lloyd, appointed in February, has sacked 87 staff since July, and has committed to shedding another 300 jobs in the next few years.

Proust says: “We are going through a significant transformation of the business. The board’s role is not to do it. It is something the senior management have to do, with the board questioning and probing.”

The board, fully engaged in the changes being wrought, and holding extra meetings to deal with the company’s crisis in the lead-up to Lloyd’s appointment, has suffered a pay cut: 42% for the chairman and 25% for all its non-executive directors. Proust explains: “We have slipped out of ASX100 – we are about 135, last time I looked. The benchmarks that applied in the top 100 no longer apply. It is no good saying we are working harder; we have to ask, what are the objective benchmarks? So we asked PwC, which is our remuneration advisor. They came back and said, these ones. That led to the decision.

“The irony is we are working harder than ever before. But look at what has happened to shareholders: the price is down, the dividends are down. There has to be some sharing of the pain.”

Proust is well qualified to handle the enormous changes that are now being undertaken at Perpetual to rebuild its business and returns to shareholders.

She’s seen organisations overhauled before. Early in her career, Proust became a government advisor and then chief-of-staff for the then-premier, John Cain, when Labor regained government in 1982 after 27 years in exile. “The public service was in need of significant reform. There wasn’t a senior woman anywhere in the place, except Rowena Armstrong, who was chief parliamentary counsel. Moribund is not too strong a word to use.”

Cain and his ministers made big changes. “What I was able to observe was John bringing in the next generation of people to lead departments. I was with Jeff Kennett when he did it in the ’90s in a very different way, but John was at the vanguard of very significant public service reform in Victoria.”

Years later, in her last executive role as chief executive of the ANZ’s finance business, Esanda, Proust was the change agent. “We had to have some very significant change. It was way before the GFC, but the whole competitive landscape was changing, and the old ways of doing business had to go. GE had come in … and there were others offering the car loans that were Esanda’s bread and butter. Our technology was outdated.

“For me, the balance was about how to balance our new strategic direction and how to we get there, with the need for business as usual.”

Proust reaches into those experiences to ask the right questions, and provides the right support, as Lloyd wrestles the fund manager into a new shape. “Whilst Geoff and his team are the ones going through it, and it is a different business and different challenges, I can remember what support is needed. It is the ability to have the conversation with someone. Not saying I am going to do A, B and C, but testing something, allowing the board to test ideas with you and offer their experience.”

The path to the board

Proust’s first passion was politics – she worked free in John Cain’s office when he was in opposition – but her first job was in business in BP Australia’s government affairs division. “The business community, and not just BP, was becoming more professional in its dealings with government,” Proust recalls. “My role at BP was a symbol of that: they realised seeing the chaps at the club wasn’t going to cut it anymore.”

Proust was among a generation of clever graduates who learned the art of leadership at two of the nation’s big companies, BP Australia and Shell Petroleum (now operated primarily from overseas).

BP released Proust on secondment to work for Cain for two years, realising how valuable her experience at the heart of government would be.