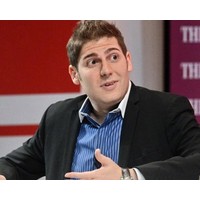 The brainchild of Harvard classmates, Facebook is now a multibillion-dollar company connecting everyone and everything.

But it wasn’t just Mark Zuckerberg who started the iconic site. His business partner, Eduardo Saverin, whose partnership and consequent falling out was made famous by the film The Social Network, played a large part in its construction.

Saverin, who is now a billionaire after his famous settlement with the company, has lived in Singapore since 2009 where he makes investments and pursues entrepreneurial interests.

The usually media-shy Saverin spoke at The Wall Street Journal’s Unleashing Innovation executive conference in Singapore last week, offering insights into the future of the internet, his relationship with Zuckerberg and how Facebook could change the healthcare and innovation industries.

1. Health and education: A focal point of innovation

Saverin says the data storage potential of Facebook offers huge potential for innovation in the education and healthcare sectors.

“Healthcare and education are two of the critical cornerstones. I do hope that – from an innovation perspective – is tackled next. It is our livelihood. There is so much that can be learned and pushed through.

“For education, it could be a tool to engage students, get them socially incentivised to learn. It could impact healthcare.

“Education is something huge. I went through it. There is a lot that can be pushed through to make it more student-focused, people-focused, on the edge. How can it be used to improve the engagement of students? How can you make it targeted so everyone gets what they need to fulfil the promises to learn,” Saverin says.

2. The importance of the Asian market

Saverin is an investor in start-ups Jumio, a mobile credit card payment company, and the Singapore-based company Anideo, which specialises in creating Apple iOS and Android applications.

“Asia is, whether you look at internet growth, [or] mobile growth, the centre in terms of where the user and consumer base will be in the future, so it’s phenomenal for me to come here and learn.”

He said life after Facebook would be “tough”, but that’s not his main concern.

“Every step of my life is not about creating a new Facebook or something new necessarily that goes and gets distributed to a billion-plus people.”

Saverin described the film as “an entertaining work of art”, raising questions as to what his relationship with Zuckerberg was really like and the reasons for the falling out.

“I’m sure a documentary would have been far more boring.”

He said the film was an apt portrayal of how a start-up can “take over people’s lives” and he said it captured “the spirit of an entrepreneur”.

Saverin has long been criticised for renouncing his US citizenship in 2011 ahead of Facebook’s IPO, with critics saying the move was tax-driven.

The Australian reported if Saverin had kept his citizenship, he would be paying up to 40% in income tax compared with only 20% in Singapore.

“No, I did not rescind my citizenship for tax purposes. It was a personal decision,” he said. “It was a personal life decision. I intend to live out here (in Singapore). I have a lot of companies based in the US that I invest in. Bigger picture, hopefully people will understand and realise that decisions like that are personal and based on your own lifestyle and priorities.”

While Facebook seems to be well cemented in the social media realm, Saverin says its biggest threat is itself.

“Weirdly, it’s how fast it’s growing and evolving. The velocity of adoption of technology is phenomenal. And in its own way, it is a huge risk. Since it has become such a huge element in people’s lives, it becomes the core to all sorts of influences in society. The biggest risk is to grow too fast. It is a huge asset, but ironically it is one of the biggest risks.”