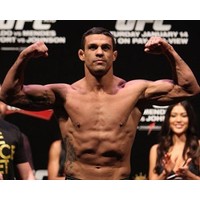 Dana White is president of Ultimate Fighting Championship (UFC). The mixed martial arts phenomenon is now firmly positioned as one of the world’s most popular sports brands, valued by Forbes at more than one billion dollars.

The chrome-domed 43-year-old former bouncer exudes a street-smart attitude, but he’s no mug.

In 2001 White hooked up with brothers Lorenzo and Frank Fertitta to purchase what was then an ailing UFC business. White has since presided over a growth curve the envy of business entrepreneurs the world over.

• The fastest-growing sports organisation in history

• The largest pay-per-view TV provider in the world

• Throw in the fact UFC programming is available to more than one billion households in 148 countries and territories and you have a sports juggernaut that shows no sign of slowing down.

A key to White’s (and UFC’s) mind-boggling success has been social media. It’s no coincidence the rise and rise of UFC has run parallel with the continued popularity of social networking sites. With mainstream media reluctant to cover UFC, the organisation built its own following via online channels.

“Twitter for me helps me run my business in a way that I never could if I didn’t have social media,” he told the audience at New Media Expo in Las Vegas in January.

1. Be active in social media channels

White has nearly 2.5 million followers on Twitter (and more than 730,000 on Facebook) but he’s not there for show – he tweets constantly and regularly takes photos of his life on the road and uploads them on Twitter.

“I speak directly with the fans, I talk to the fans one on one…It’s me – you’re talking to me personally,” White says.

He also uses Twitter as an alert mechanism for when things potentially go wrong. The time a group of VIPs tweeted at a major event that their view of the ring was obscured by camera equipment, White saw the tweet and sorted out the situation pronto.

2.  Empower your people to engage in social media

Not only is White super-active on social media, but he encourages his staff, plus the UFC’s 400+ fighters, to do the same. White knows there are potential dangers in letting so many brand ambassadors “loose” on Twitter, but he’s pragmatic about it – so long as they don’t try and be funny! “Leave the jokes to your friends…in your inner circle,” he says in this interview with Dino Dogan from Triberr.

3.  Take people behind the scenes

White is a big believer in producing content and distributing it via social channels. Obviously there is the mountain of programming his company produces for pay and free-to-air television, but “on the fly” video and photos also play a part in helping White keep the buzz going for UFC.

His “insider” video blogs, raw productions of about 10 minutes in duration, regularly attract hundreds of thousands of views worldwide.

Wine guru and startup entrepreneur, Gary Vaynerchuk, calls it being true to your DNA – in other words, be real, and don’t pretend to be someone you’re not. It’s never been a good move to switch between ‘business’ and ‘personal’ personas, but in today’s pervasive social media world you will be caught at some stage ‘faking it’ and people have little tolerance for inauthenticity (remember former prime minister’s Kevin Rudd’s angry swearword-laden rant when he thought the video camera was turned off?).

There’s a difference between spruiking your brand because you feel you have to, and spruiking it because you love it. White doesn’t pretend to be anything other than a fan of UFC, and it’s this passion he shows for the sport which endears him to legions of UFC fans around the world.

In a world where leaders sugar-coat the negatives, White continues to win fans for his brutal honesty. Mashable.com reports him as saying: “Some fights are going to be the best fights you’ve ever seen, and some are going to suck,” White said. “And I think you’re better off to go out and talk about why the fight sucked and you know, be honest about it. You’re not going to fool anybody.”